Skookum Brewery’s story could not be more emblematic of Washington’s craft beer explosion. The Arlington brewery started as a homebrew operation in a 1918 dairy bar repurposed to be a home, grew gradually, won medals and now brews in a giant building, using locally-sourced ingredients, churning out what seems like three different IPAs a week, and is the darling (with a bold growl) of most serious craft beer drinkers. It was 2007 when Ron and Jackie Walcher opened the brewery down a dirt road near Arlington. Today, Skookum head brewer Hollis Wood and his small team churn out “big bold strong” craft beers in a giant facility with a popular taproom down the street from the Arlington Airport — managed by an Angel, a big, bearded lovable man named “Angel.” Skookum Brewery with its delicious and heralded Mammoth Jack IIPA, Murder of Crows stout and Amber’s Hot friend amber ale lives, breathes and brews locally. It brews beers that are locally sourced, with more than 90 percent of their barley grown and malted in state, on equipment predominately purchased locally including several pieces made in Washington state. In conjunction with tonight’s Lodge Meeting with Skookum, Peaks and Pints presents a five beer flight of the Arlington brewery’s goods we call Craft Beer Crosscut 6.22.17: A Flight of Skookum. 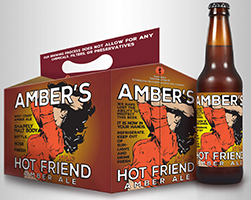 So your best friend and his girlfriend have a friend in town, and she doesn’t want to be the third wheel. As blind dates tend to go, this could turn out to be a match made in heaven or a stage in hookup hell. Let’s hope the date’s as good as Amber’s Hot Friend, an amber ale with a voluptuous malt body, smells like a little chocolate, a little pine, and loads of brown sugar and nuts and tastes of caramel and mild citrus plus enough hops to keep her feisty.

Skookum piled on the Mosaic, Nelson, Amarillo and Chinook in the kettle along with silly amounts of Nelson, Mosaic and Southern Passion in the dry hop for a tangerine and stone fruit slap in the face. 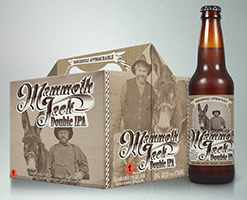 Skookum chose its double IPA Mammoth Jack as their first beer to package in 12-ounce bottles and for good reason. The brewery’s tagline is “big bold strong,” and that’s Mammoth Jack, which is named after the large-headed mammoth jack donkey. Mulligan and Johnny Green, of Arlington, are the artwork on the bottles and packs. The other reason Mammoth Jack was chosen to lead the 12-ounce parade? It’s a freakin’ delicious, well-balance West Coast IPA with a touch of rye and massively dry hopped with Yakima Valley hops. It arrives with resiny hops bitterness, pine and grapefruit rind along with some orange peel and mint toward the end for a long, tangy finish.