The names threaten. What to believe? How fearful and anxious to be, exactly? One thing Peaks and Pints knows for sure: It’s not advisable to live in fear. It’s a fool’s game to base your life choices around what might happen. After all, the Big One has been inevitable in the South Sound for decades (and it still is). Human extinction, too. Irish Death? Turbodog? Holy crap Velocihoptor? How to process it all? How to properly understand the real risks, the false alarms, the ominous and seemingly imminent potential for collapse? Try them. Today’s beer sample flirts with the scary unknown. Welcome to Craft Beer Crosscut 2.8.17: A Flight of Fear. 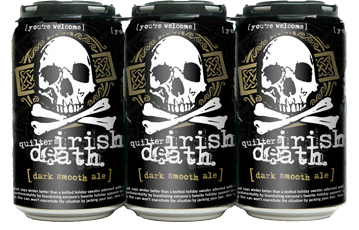 Created by the Iron Horse Brewery founder Jim Quilter, this craft beer has been called a sweet stout, strong ale and Scotch Ale. We call it delicious with a massive amount of malt that goes down easy. On the nose, caramel malt was definite and distinct. On the tongue, is over-the-top malty with sweetness and caramel flavor. We survived this beer candy to see another day. 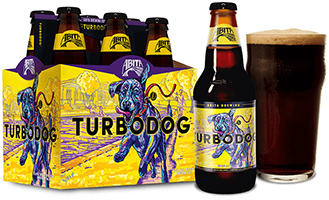 Abita Brewing Co.’s Turbodog is a dark English brown ale brewed with a mix of pale, crystal and chocolate malts, dry-hopped with Willamette then fermented with German Alt yeast. We sniffed sweet milk chocolate, cocoa powder, light coffee, a toffee-like aroma, a bit of caramel and roasted malts. In the bowl, we lapped up the same flavors as the cold nose. Delicious, light body craft beer? Indeed. Turbo? No so much. 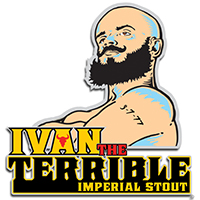 Big Sky Brewing‘s Ivan the Terrible Imperial Stout isn’t terrible. This brew pours the darkest of brown and is topped by a two-finger mocha froth that quickly collapses. The nose opens with boozy bittersweet chocolate, candied date, fig and spice. A decent amount of roasted chocolate throughout, but this is not a chocolate-forward beer. Rather, Ivan is a balanced medley of traditional stout flavors — dry fig and black cherry, with more bittersweet dark fruit flavor growing on the mid-palate as the beer warms. There is a little brown sugar flavor in the mix too, but not in a “sweet” way, with a hit of bitter hops on the finish. We feel safe. 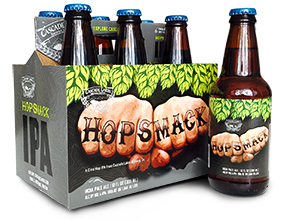 We ducked left and right avoiding the punch. Yes, Cascades Lakes Hopsmack is a delicious, easy-drinking, Citra forward IPA from Cascade Lakes Brewing in Redmond, Oregon. It comes at you with orange, grapefruit and tangerine citrus up front. Citra zings hit the tongue with mildly dank pine and citrus. But, a biscuit, malt backbone makes this an easy drinker. We walked away unharmed. 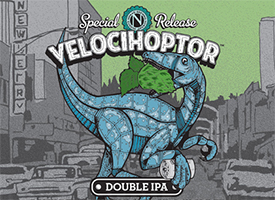 Unearth the deliciousness of Ninkasi Brewing‘s Velocihoptor. And we do mean delicious. The double IPA pours bloody red. It hits the nose with caramel malt, pine, tropical fruits and slightly dank hops. Brewed with Meridian, Centennial, Simcoe, Columbus, Bravo, and Sterling hops, this beer is sticky and heavy with caramel malt plus a hint of biscuit, citrus, mild piney hops, as well as lightly dank. Finishes with great resinous citrus, piney hops and malt with lingering hop bitterness. No sign of the sickle-shaped claw.