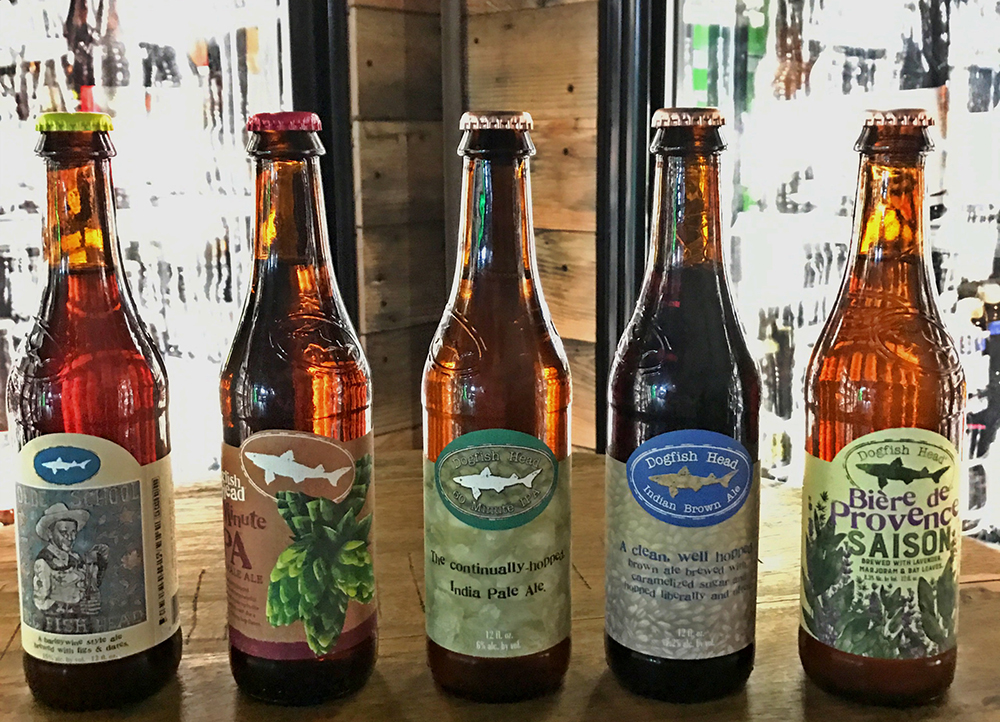 Sam Calagione started making beer in 1995 when he opened Dogfish Head Brewings & Eats in the beach community of Rehoboth Beach, Delaware. It was the smallest commercial brewery in America at that time. Within a few successful years, the company activated a major expansion, switching from making very small, homebrew-style batches to industrial-sized sessions in a sizeable brew house. Dogfish Head expanded and moved to a 100,000 square foot facility in nearby Milton, DE in 2002. They’re one of the largest craft brewers in America but yet there may be no brewery today that exhibits such a dedication to experimentation and boundary pushing. We salute Dogfish Head’s commitment to the unconventional (exemplified by their motto, “Off-Centered Ales For Off-Centered People”) with Craft Beer Crosscut 1.29.17: A Flight of Dogfish Head.

Biere De Provence is a saison brewed with lavender, bay leaf, marjoram and chervil as a nod to the aromatic herbs used in Southern French cuisine. Cloudy gold in color, the aroma is floral with both sweet and spiced notes. It features sweet fruits and black pepper, cardamom, and the as-advertised additional ingredients of bay leaves, marjoram, and a subtle touch of lavender. Think bananas and cloves for simplicity.

Dogfish Head melds three standard styles — American brown ale, Scotch ale and IPA — to arrive at Indian Brown Dark IPA. Brown ale notes dominate the aroma with toasted nuts, baked bread, crumbled chocolate and a touch of coffee. The Scotch ale third has more impact on the flavor — caramel, bitter dark chocolate, smoky peat, very subtle hints of raisins. The IPA third is potent, as it should be — the beer is hopped and dry-hopped with a regimen similar to the one Dogfish uses for its 60 and 90 Minute IPAs. Hops are earthy in the nose, but lend pine and grapefruit — as well as 50 IBUs of bitterness — to the flavor.

The 60 minutes of continuous “A Northwest Hop” contributes to sweet aroma of apricot and pear — similar to a Riesling. The beer doesn’t taste as sweet as it smells and instead we get notes pungent grapefruit pith with a slight bitterness.

Olde School Barleywine is a powerful beverage, and that’s an understatement. This bruiser tips the scales at 15 percent ABV, with apricot, plum, apple, orange and sharp, peppery spice on the nose. It has a solid orange-vanilla-fig sweetness up front, somewhat like Cointreau or Grand Marnier, but does not finish too sweet at all, with tobacco and light licorice on the back end.