Small screen enchantress Emilia Clarke teams with Henry Golding and Michelle Yeogh, stars of last year’s unexpected big screen sensation, Crazy Rich Asians, for romantic comedy with a heart… Last Christmas, showing at 7 p.m. at the Blue Mouse Theatre. Kate (a raccoon-eyed Clarke) isn’t hiding from her Yugoslavian heritage so much as she’s trying to avoid a mother (Emma Thompson, who also produced and co-scripted) bent on foisting it down her throat. Now, her life as a Christmas store elf is about to take a turn for the metaphysical, thanks to the mysterious Golding. It’s worth a visit to the Blue Mouse to behold cinematographer John Schwartzman (National Treasure: Book of Secrets, The Founder) accept the challenge of illuminating a feature almost entirely by Christmas lights. It’s also worth a visit to Peaks and Pints before or after the film for a holiday beer flight we call Christmas Beer Crosscut 12.9.19: Last Christmas.

The Lost Abbey Gnoel de Abbey is a winter warmer brewed to be lighter in body while maintaining nuanced notes of oak. Beginning with aromas of freshly brewed espresso, Gnoel has hints of cocoa, vanilla and holiday spice, finishing with a crisp coffee bitterness. 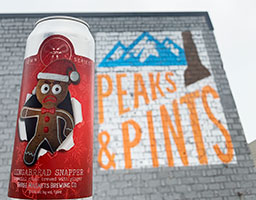 Three Magnets Brewing created a gingerbread beer — a seasonal imperial stout brewed with fresh ginger. It’s spicy and festive, with bright ginger vibes and a subtle touch of winter spices — plus notes of rum, chocolate and molasses. Expect a rich, bock-like body to enjoy next to Peaks and Pints’ fireplace.