You might have spotted former football player Mike Besser wearing a keg costume at a beer festival, slinging craft beer for Top Rung Brewing Company in Lacey, or chatting up movers and shakers in the craft beer world. Either way, Besser is definitely a beer dude about towns.

He’s about to be a one-town beer dude. 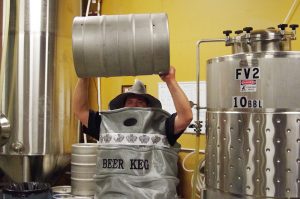 A lifelong craft beer drinker and beer blogger at BrewDad.com, owning a craft beer store and taproom has been a dream for the Olympia resident, until an off-the-cuff comment with NW Caps N Taps co-owner Spencer Neff during a Top Rung keg delivery sparked an opportunity. Within two months it was a done deal. Besser, in partnership with his parents in Salt Lake City, went from writing and selling beer to buying beer in Bonney Lake.

Mike Besser has his grandfather to thank for enticing him into the beer and liquor industry. As a young boy he would have conversations with his “grandpa” after his work day. Grandpa was a butler/bartender for the rich and famous in Beverly Hills from the late 1940s until the mid 1990s and knew everyone. “Grandpa Charles was awesome,” says Besser. “He would come home with different items from the parties. He would wake me and my brother up to show us what the lady of the house let him bring home. Most of the time it was whole hams, big bags of fresh food but then other times he would bring home whole bottles of whiskey. Now we were much too young to try it, but the bottles looked so cool. And he would tell us about how Jimmy Stewart would order his drink or how President Reagan would order and then Nancy would make him water down his drink. I was hooked!” 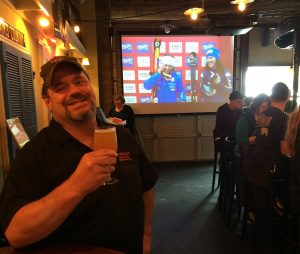 At 21, Mike Besser became a bartender at Oceans Restaurant in Salt Lake City, Utah. Since then, he has worked in many restaurants, bars and beer bars.

When he and his wife decided to have a child, Besser became a stay-at-home dad. Although he had been home brewing and blogging for years, he decided to broaden his two loves and BrewDad.com was born around 12 years ago, which coincided with his daughter’s birth, who is known today as “SodaKid.” Besser posted stories daily with periodic piece in Northwest Brewing News and trips to the Beer Blogger Conference.

When Top Rung Brewing Co. in Lacey approached him to help with sales two years ago, Besser answered yes before owners Casey Sobol and Jason Stoltz could finish their question. Besser helped put the Lacey brewery on the map, with a deep craft beer knowledge and huge, hilarious personally.

Peaks and Pints caught up with Besser before joining him at the Washington Brewers Festival in Redmond tonight, where Besser will don the keg costume one last time for Top Rung.

PEAKS AND PINTS: Congratulations Mike. Will you change anything at NW Caps N Taps?

MIKE BESSER: Thanks man. I plan on keeping a lot of what Spencer and David (Monahan) have built. The changes will come as I add my BrewDad spin. We are going to focus primarily on American Craft Beer. There are so many great beers from all over this country. Why does one need a Belgian from Belgium when we have Sound Brewing, Holy Mountain and many more regional breweries flawlessly brewing the same styles? I, of course, will listen to the craft beer drinkers of Bonney Lake.

PEAKS AND PINTS: Some people think sours aren’t tart enough, others think they’re too tart. How do you plan on presenting sours? 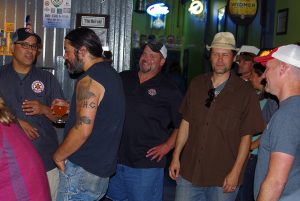 BESSER: Sours are a fun style. Of all the styles in the beer world this style is my nemesis. For me, it is like drinking liquid sour patch kids. Sometimes the funk is too much for me. But, I get it. Others love the flavor and complex nature. We will have one sour on tap at all times. So yes, expect a dedicated line just to the funky sour.

PEAKS AND PINTS: How has the beer consumer changed over the last five years?

BESSER: In the past 5 years there has been a huge increase of breweries in this country and especially here in Washington. The consumer is more informed than before. They have such a better knowledge of hops and the process. The flavors and new styles that have been added, the consumer has reacted to in a good way blows me away. Gose comes to mind an — old school beer that has a huge new following. I look forward to helping the consumer find the right beer for their flavor profile and or special occasion or special menu they have planned.

PEAKS AND PINTS: We know you’re probably sick to death of “what’s your favorite beer” question, but we do like to ask about a preferred style or where you’re at in terms of what you prefer to drink?

BESSER: When I started my journey more than 15 years ago, it was the dark beers — I loved Stouts and Porters. As my adventures into beer has taken me all over the country I became a fan of finding the best IPA. I love the hops the different flavors and aromas. Right now you’ll will find me trying all I can … but if I pick just one at a new place, it is usually an IPA. I was fortunate to work for a brewery that makes an outstanding IPA. Top Rung’s Prying Irons was always my go to at the brewery. 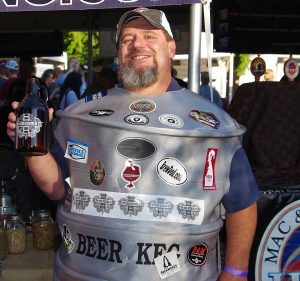 PEAKS AND PINTS: What will you miss most about beer sales?

BESSER: I love talking with the owners, bartenders and beer buyers about beer and Top Rung. I enjoyed pouring a Top Rung sample and watch the reaction from the buyer. Oh man, if I could pour them a fresh beer from the brite tank — pure joy. I’d hear “we’re not buying Pumpkin beers” and then they would try our pumpkin beer and within seconds, “Sure, I’ll take a half barrel.” I’m going to miss the people. This is a great industry and I can’t wait to see what’s next.

PEAKS AND PINTS: What would you like to say to Jason and Casey at Top Rung?

BESSER: The opportunity to work for Top Rung was a dream come true. They took a beer blogger who wanted to get his foot in the industry and let me live out a dream. I learned more in the two years than I ever thought. To say it was always awesome would be a lie but dang it was seldom to have a bad day … I was selling beer.

Jason taught me so much about the brewing process — how and what the process did at each step in order to get specific flavors and profiles. We talked beer from the moment we mashed in until we shut off the lights at the end after I was gone for the day.

Casey taught me so much about the business end and what it is to be a great boss. I think at times he was trying to convince me to stay by showing me the mountain of papers I’ll soon have under my charge. (Laughing) No such luck. He was kind. He listened. He always had my back.

I am truly grateful for the opportunity. It was much more than a job and they more than just bosses or co-workers. It’s an understatement of how much they helped, affected and changed me. I will always look to them for advice, help and friendship. I will always champion Top Rung Brewing and if they ever need my help at anytime I will be there.

NW Caps N Taps is still open at 20840 WA-410 in Bonney Lake. The officially change to BrewDad’s of Bonney Lake will happen sometime in early July. In the meantime, follow BrewDad at http://brewdad.com/. 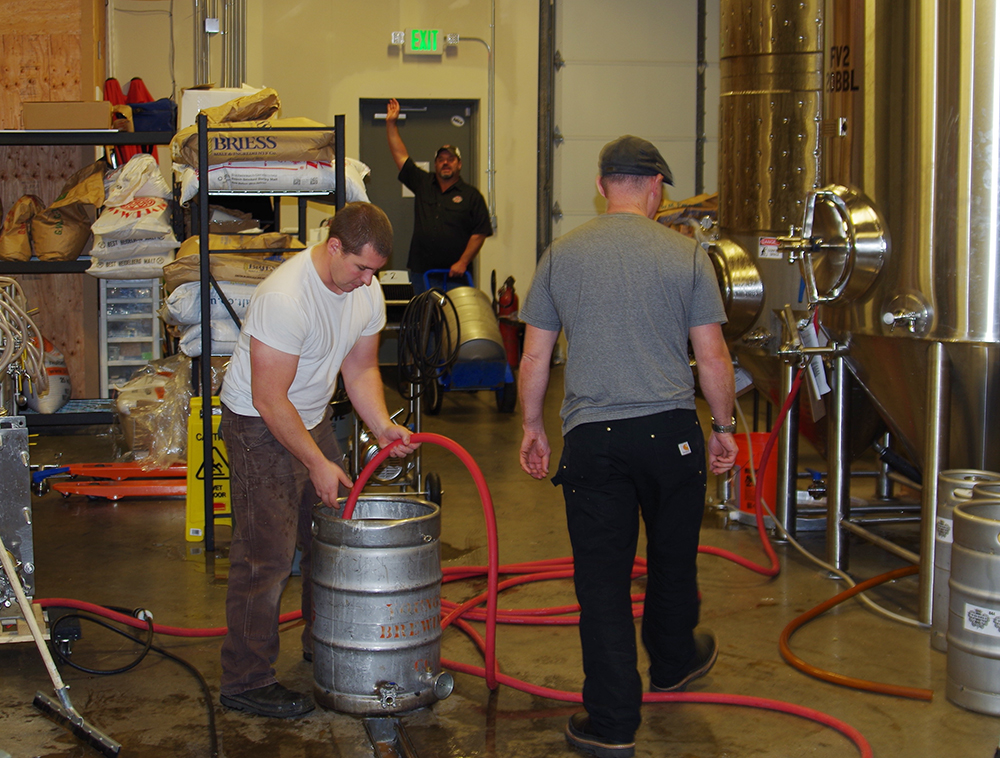