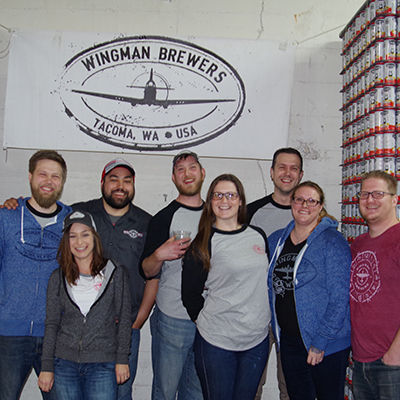 Fun Facts:
>>> The brewery’s name and image is homage to Thoburn’s grandfather, an artist who served in World War II in the Pacific, and painted the sides of fighter planes when he could.
>>> Owners were friends in high school and college in Tacoma.
>>> Wingman brewer Mike Dempster cut his teeth at Greenpoint Beer Works in New York followed by Buoy in Astoria, Oregon, and then helped launch Graff Brygghus in Norway before returning the states and joining the Wingman crew in 2016.

Thoburn, Derrick Moyer, Daniel Heath and Jason Sabol launched Wingman Brewers as a nano-brewery in April 2011. They drove their beer from their small space at 1727 Fawcett in downtown Tacoma top The Red Hot for a beer release celebration. In 2012, they moved their one-barrel system to their current location at 509 ½ Puyallup Ave., adding a taproom. In 2013, they were a 7-barrel operation, doubling their production in two months. In 2014, they added larger fermentators, doubling their production again. Toward the end of 2015 they doubled production once again, as well as bottle a fancy bottling machine and signed with Click Distributing.