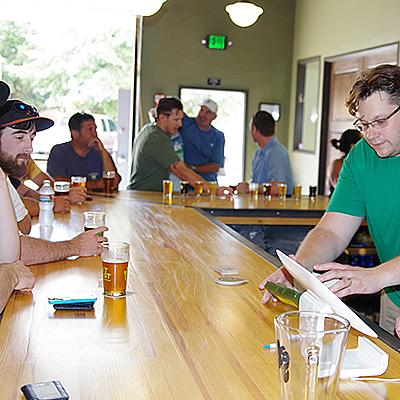 Fun Facts:
>>> Bryon and Aaron are full-time firefighters in Pierce County
>>> The name of the brewery is a triple entendre: 1.West Coast, 2. Northwest weather, 3. Prohibition, where citizens voted wet or dry. Many wet Coast beers give a nod to Prohibition days, for instance Hi Jack! was used in speakeasies as a code word for law enforcement.

West Pierce Fire and Rescue firefighters Bryan Copeland and Aaron Johnson are the brewers and co-owners behind the business, along with their wives Molly Copeland and April Johnson. They started planning their brewery for years, but didn’t get serious until 2012. They opened in Gig Harbor in 2015 on a 3.5-barrel brewing system, with three 7-barrel bright tanks and four 7-barrel fermenters. They serve their beers and guest taps in an on-site taproom. Guests (all ages) can view the brewing process and purchase ales for consumption at home, via growlers and eventually bottles and cans.