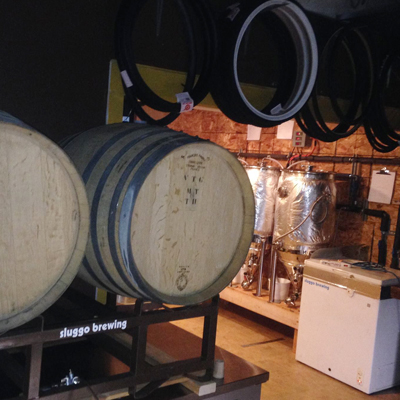 Specialty: Too soon to say, but Sluggo says it leans toward dark beers

Fun Facts:
>>> Only legal dog-friendly brewer in Tacoma, due to the use of recyclable cups.
>>> Sluggo Brewing doubles as a vintage bike store and skateboard shop.
>>> Josh Norris owns Half Pint Pizza Pub next door, where Sluggo Beer is on tap.

Housed in the former Sluggo Music space, Sluggo Brewing operates on a 1-barrel electric system. The Tacoma brewery began with three 1-barel fermenters, but has since installed two 2 -barrel fermenters. The taproom is outfitted in thrift-store furniture; kids are welcome, as are dogs. No food is served, but Half Pint Pizza delivers.