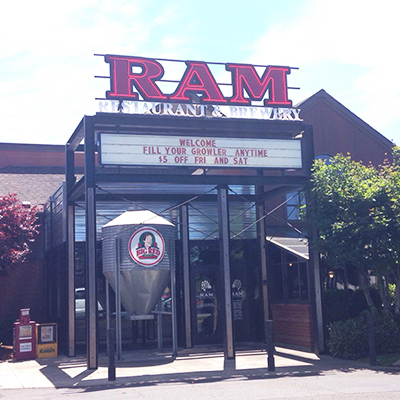 Specialty: The Ram is known for its burgers and beer-infused dishes, as well as Big Horn beers.

Cal Chandler and Jeff Iverson, Sr. opened the Ram Pub in Lakewood’s beloved Villa Plaza in 1971. The Villa Plaza became the Lakewood Mall in the late ’80s. The Ram Pub moved 200 yards north and become the RAM Restaurant — and in 1995 added “Brewery” to the title after the Salem, Ore. RAM found success with an in-house brewery. Over the years, the full-service RAM restaurants — with menus of burgers, sandwiches and craft beer — began opening locations up and down the Puget Sound. Then it was in Oregon and Idaho. Then in locales father east. Today, Dave Leonard is head brewer for all RAM locations, but each facility also has its own brewer. Pacific Brewing & Malting Co. head brewer Bethany Carlsen and sales executive Andy Kenser came from RAM brewing experiences.