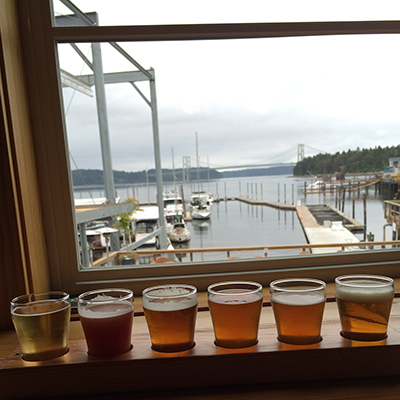 Specialty: Besides the waterfront view of the Narrows bridge, consistency and balance

Fun Facts:
>>> Husband and wife team
>>> The brewery is built on wood pilings next to Narrows Marina above the Narrows waterway.
>>> Octopus décor everywhere, as the Giant Pacific Octopus is most commonly found under Narrows Bridge
>>> Narrows Brewing opened with Joe Walts as head brewer, but his home state of Wisconsin called him back. Walts returned to work for his former employer, Ale Asylum Brewing.

The Narrows Brewing Company is a 15-barrel brewhouse with a 20,000 square foot space for barrel-aging storage and a new Infantile barrel age system. Part of the historic mill building at Tacoma’s Narrows Marina, Narrows Brewing Company’s Taproom and Brewhouse looks out at the waters of the Puget Sound. Enjoy free 700 feet of guest docking.

Narrows offers a rotating selection of 14 taps – including craft beer, cider and wine, trivia nights, special events and a relaxing atmosphere. If you are hungry, you can order from Boathouse 19 next door or bring in other outside food.