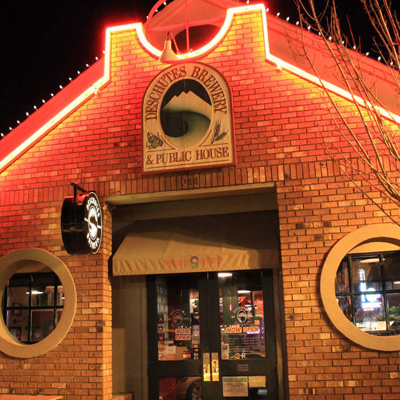 >> Deschutes Brewery is a family business but employees own about 7.9 percent of the company.

>> Deschutes is building an East Coast brewery in Roanoke, Virginia.

>>Recently opened a tap room and restaurant on the East Coast in Roanoke, Virginia with plans to start production in their new brewery in 2021.

Californian Gary Fish established his brewpub concept, Deschutes Public House, in downtown Bend in 1988. Named after the Deschutes Rover, Deschutes was Central Oregon’s first brewery. Fish hired John Harris (founder of Ecliptic Brewing Co.) from McMenamins. Legislation and a growing provincialism for locally crafted beers soon turned the microbrewer of Mirror Pond Pale Ale and Black Butte Porter in obscure Bend, Oregon into a macro success, as the state’s largest brewer by barrel count. In 2012, the brewery expanded its brewing facility by 6,750 square feet, adding 105,000 barrels of production capacity. Still family and employee owned, the brewery is known for brewing a diverse line-up of award winning beers including the popular Fresh Squeezed IPA, Black Butte Porter, and Mirror Pond Pale Ale. With a second brewpub in Portland’s Pearl District that has become a popular destination for craft beer lovers from around the world, Deschutes Brewery now ships beer to 28 states, the District of Columbia, and internationally from its main brewing facility located on the banks of the Deschutes River.