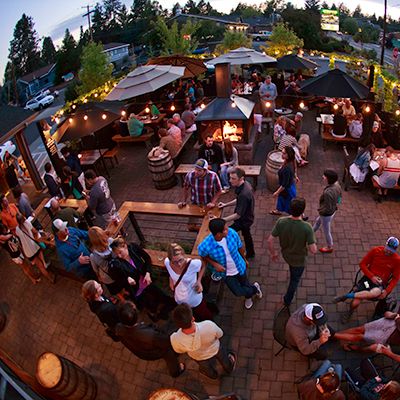 10 Barrel Brewing Company dates back to 2006 when twin brothers Chris and Jeremy Cox moved from Portland to Bend to escape their corporate jobs and take a shot at buying and running a bar — Lucy’s Place, which they renamed JC’s Bar & Grill.

Their love for craft beer resulted in their small startup called Wildfire Brewing in 2006. The brothers and partner Garret Wales focused on selling their beers to local bars and restaurants. The first two beers in the lineup were Code 24 Pale Ale and Logger Lager, followed by Backdraft IPA.

In 2009, Wildfire restaurants, a chain of eateries with locations in Illinois, Minnesota, Virginia and Georgia, forced the trio to change their brewery name — which they changed to 10 Barrel Brewing Company after the small craft brewing system.

In January 2011, 10 Barrel hired Jimmy Seifrit, the brewmaster of the largest brewery in Bend and the largest independent brewery in the state — Deschutes Brewery. With Seifrit’s help, the 10 Barrel team expanded to a much larger 50 barrel brewhouse and hired brewer all-star Tonya Cornett of Bend Brewing to take over the smaller 10 barrel brewhouse for special releases and product development.

In early 2013, 10 Barrel expanded further, opening a pub in Boise, Idaho.
In November 2014, Anheuser-Busch, the U.S. arm of the world’s largest brewer, added 10 Barrel to its portfolio of craft breweries. The trio reassured customers that little would change when they first announced the sale in a video on their website.

In March 2015, Bend-based 10 Barrel opened a brewpub in Portland. Taking over the former Mellow Mushroom spot in the Pearl District, the 6,229-square-foot space has seating for 175, which will expand this summer when they open up rooftop seating.

Several weeks ago, 10 Barrel expanded into Colorado, selling its Apocalypse IPA and Joe IPA along with seasonal varieties in Denver and Boulder. Colorado is the fourth state in which 10 Barrel is sold, joining Oregon, Washington and Idaho.

2017 opened pub in San Diego and a second in Bend, expanded offices.

Awards: Award winning beer is not new to 10 Barrel with its Crush and P2P, just to name a couple. Most recently, 10 Barrel earned 2 golds and 5 silvers at the 2020 Oregon Beer Awards.

This West Coast style IPA is their flagship beer. Fruity and citrusy hop aroma shines, with hints of pine resin. The four-hop flavor dominates, re-enforcing the aroma with more citrus, fruity and piney notes. The malt character is clean and smooth with a unique toasted flavor, all held together by a firm bitterness. Apocalypse has a medium-bodied mouth feel, finishing crisp and dry. IBUs 70, ABV 6.8%

Sinistor Black Ale uses a special German dehusked black malt that is free of astringency, giving the beer a rich black color without the traditional dark beer characteristics. Expect subtle hints of chocolate with an easy drinking balance on the back end. IBUs 38, ABV: 5.4%

Multiple layers of lemon were added to a German Berliner Weiss base to basically make a lemonade soda. IBUs 4, ABV 4.5%

Courtesy of this totem pole, we can take in the visual swirl of the 10 Barrel history. …