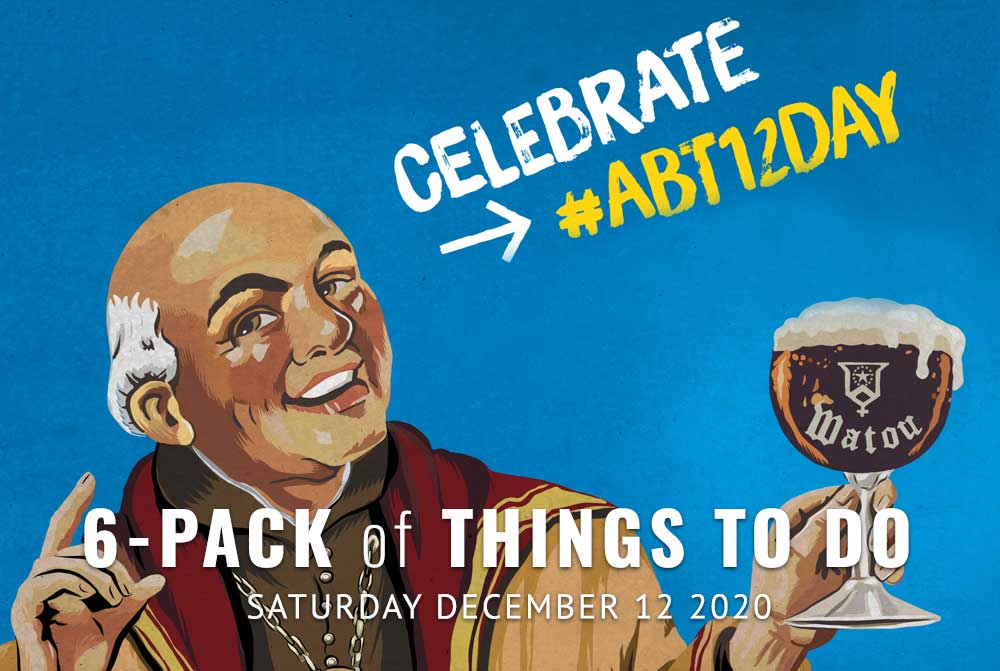 Peaks & Pints presents a 6-Pack of Things To Do Today. Thankfully, for once, we didn’t have to hire reporters to find events. We actually didn’t have room for the Santa Runs Tacoma 5K, Downtown Tacoma Holiday Haul Crawl, Job Carr Cabin Craft Saturday Ornament Kit, Zoolights, Fantasy Lights and on and on — it’s a busy day in Pierce County. Yay!

ABT 12 DAY: Look, every day is Abt 12 Day here at Peaks & Pints. St. Bernardus’ flagship abbey-style quadrupel has been in our cooler since day one, so we celebrate it 24/7. Still, if Dec. 12 has been dubbed Abt 12 Day, then who are we to argue. The Abt 12 is a classic Belgian dark quadrupel brewed since 1946, on the basis of the original recipe compiled by the Westvleteren monks. The Abt, or Abbot, is the highest-ranking monk in the abbey; so perhaps it’s no surprise that the brewery sees the Abt 12 (10%) as the highest-ranking amongst abbey beers. It hits the nose with banana, tropical fruit, raisins, spices and rum. The flavors come through as intensely fruity, with notes of banana, pineapple, as well as spicy clove, añejo rum and anise. Throughout the sip, spicy pepper and black licorice counter the sweetness before a flash of bitterness segues to the beer’s enduring dry finish. Stop by Peaks & Pints when we open so you can join the St. Bernardus Facebook Live party at 11 a.m., or grab one for your own Abt 12 party. 11 a.m. to 8 p.m., 3816 N. 26th St., Basecamp Proctor, Tacoma

BEER FLIGHT: Every December — while the bartenders close down our Proctor District craft beer bar, bottle shop and restaurant for the night — Peaks & Pints co-owner Pappi Swarner grabs three holiday beers, heads upstairs to his office, cranks his computer speaks to an 11 and watches holiday Youtube videos. Obviously, he can’t perform his holiday tradition this year … at Peaks & Pints. No, his holiday glee now takes place inside his home, much to the chagrin of his wife and daughter. In the spirit of giving, we offer you the chance to share his joy. Today, he pairs three Christmas season beers with Max Headroom’s Giant Christmas Turkey special. Headroom, a fictional British artificial intelligence known for his wit and stuttering, distorted, electronically sampled voice, was the most ’80s that the ’80s could be. His holiday show is bad. Not even cameos by Robin Williams or Tina Turner could’ve saved it. Grab Peaks and Pints To-Go Christmas Beer Flight: Max Headroom and enjoy it with this Turkey. 11 a.m. to 8 p.m., 3816 N. 26th St., Basecamp Proctor, Tacoma

MUSIC: Pink Martini‘s blend of American swing, Latin rhythms and chamber arrangements, along with vocals in five languages, give the group’s largely original material mass appeal. Thomas Lauderdale of Portland, Oregon, founded the “little orchestra” Pink Martini in 1994. It has gone on to become a genre unto itself. Lauderdale and vocalist China Forbes will share an intimate and festive holiday concert featuring beloved songs from around the globe virtually via Tacoma Arts Live. 7:30 p.m., Tacoma Live Arts Room, $11.50 tickets here