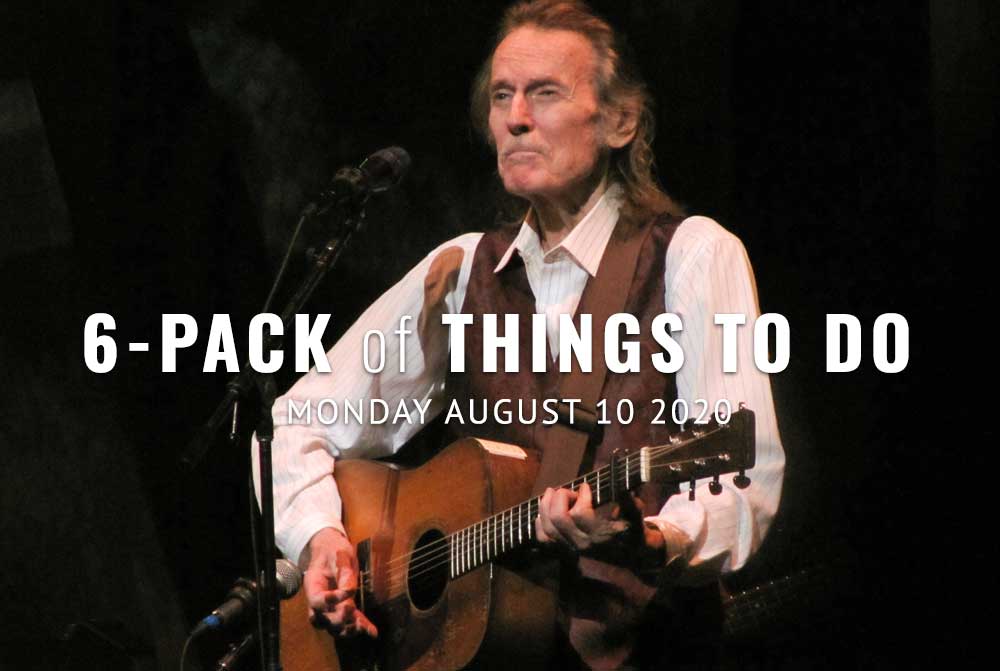 While there is certainly something about summer that screams no rules, when it comes to this one there are more than ever, which can make it tough to envision a season of any kind of fun. After all, who wants to stay indoors 24/7 when the sun is out? Peaks and Pints presents 6-Pack of Things To Do: Monday August 10 202 — six things to do today safely, some indoors and some outdoors.

MOVIE: The long, storied journey of the great singer/songwriter Gordon Lightfoot receives the big screen treatment in the documentary Gordon Lightfoot: If You Could Read My Mind, which streaming in The Grand Cinema’s Virtual Screening Room. The film, directed by Martha Kehoe and Joan Tosoni, received Lightfoot’s full participation and features exclusive interviews with the legend, weaving his story within the framework of the ’60s folk movement as one of its leaders, into his status as a ’70s acoustic rock god. Pair this movie with Offshoot Beer’s Unwind Pils from the Peaks & Pints cooler. $12 movie, photo: Gordon Lightfoot in concert at Interlochen, Michigan, by Arnielee

CIDER FLIGHT: Ultimately, cider is a regional product, and not every part of the country has access to the best varieties of apples to make it. Even if a grower planted an orchard today, it would be at least seven years before those trees produced their first fruit. Not only are Washington and Oregon two of the country’s biggest states for beer and wine, but the Pacific Northwest is leading the way with craft ciders, too. It makes sense, especially as Washington leads the nation in apple production (171 million bushels in 2018). Since it’s Monday, and Tacoma Beer Week is canceled, we thought our weekly cider to-go flight should be local. Welcome to Peaks and Pints Monday Cider Flight: Pierce County. 11 a.m. to 8 p.m., Peaks & Pints, 3816 N. 26th St., Proctor District, Tacoma

HIKE TACOMA: The outdoors is one of the few pleasures that social distancing left us. If you have access to forests and trees, by all means, go for it. But there are plenty of adventures to be had without leaving the city, and walking the metro from one end to the other is one. Map out your route ahead of time. Think through-roads with landmarks, changing neighborhoods and maybe pick Peaks & Pints as a midway spot to grab sandwiches to-go. Average walking speed is three to four miles per hour, so plan accordingly. And then start walking. If you’ve never truly walked Tacoma; it’s eye-opening.

COFFICE: Today marks the beginning of Coffice (Coffee + Office) hours for the University Chaplaincy of Puget Sound. Coffice hours are just a chance for University of Puget Sound students, faculty, staff, and alumni, as well as friends and strangers, to meet in a Zoom room, chat, and talk through all the everything we’re facing right now. You can be as serious as you want, or just show your cat. If you’d rather find time to talk privately, email dwright@pugetsound.edu and something can be up. 1-2 p.m., University Chaplaincy Zoom Room

CRYSTAL MOUNTAIN: On a spectacular Morning morning — the kind sent from above by the gods of golf — you stepped up to the 14th tee. The green sat on the other side of a creek flowing fast and loud with spring runoff, making the shot challenging, but certainly makeable for a pro. After a few warm-up snaps of his wrist, you let fly. Your shot hit the water about two feet from the edge — then skipped up to land safely on the shore. Try that when you’re playing with a ball. Crystal Mountain offers up to 27 disc golf holes between a lower and upper course. Grab a picnic cooler full of goodies from Tower 16 (summit shop below the gondola), and venture out to skip a disc off the creek. 10 a.m. to 5:30 p.m., Crystal Mountain, 33914 Crystal Mountain Blvd., no cover, buy you’ll need a gondola ticket to get to the upper course

CHOIR: If your idea of the choir still consists of haunting memories of some elementary school field trip to “experience culture,” where the weird Cowan kids freaked you out with their bleary looks and dark clothing, then your answer would probably be a polite, “No thanks.” The University of Puget Sound’s Adelphian Concert Choir presents a virtual encore performance of their Dec. 7 2019 WinterFest concert with the college’s Symphony Orchestra, Wine Ensemble, Jazz Orchestra and others. You may watch it from the comfort of your home preventing the Cowan kids from bouncing paper program planes off your head. Pair the concert with Fremont Brewing‘s Dark Star imperial stout from the Peaks & Pints cooler. 7:30-8:30 p.m., Schneebeck LIVE Youtube