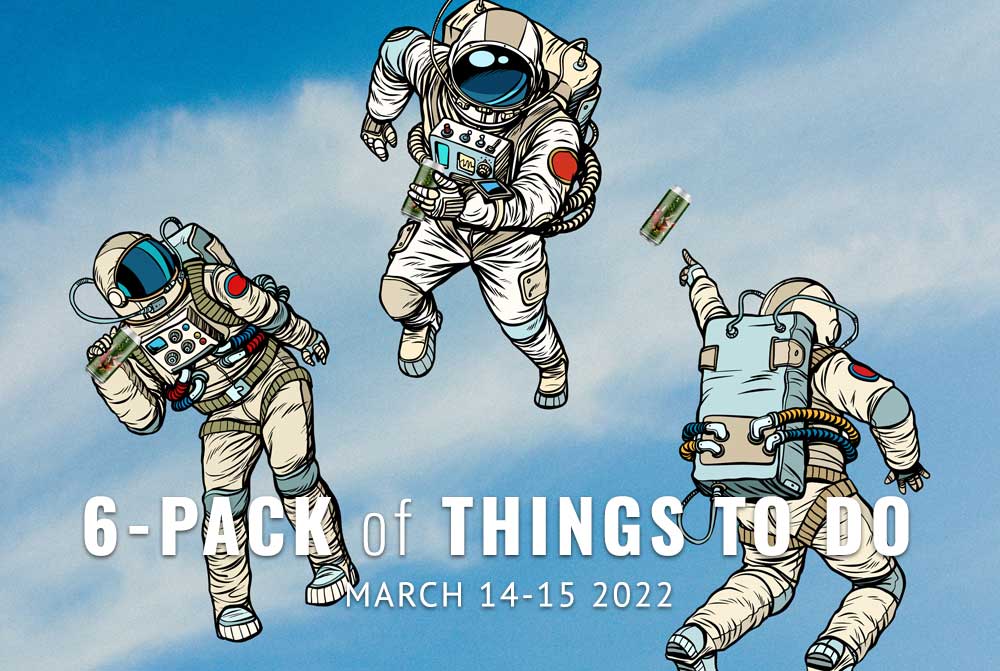 Welcome to the 6-Pack of Things To Do in the greater Tacoma area — home of many epiphanies, countless transformations, laughter and tears and awakenings of every flavor you can name, and most you really can’t, because Tacoma. Cheers!

CIDER TASTING: Hard cider, when done right, can be as good as beer or wine. Better even. Think about what we’re working with here. Beer starts as starchy water. Wine starts as grape juice. Hard cider starts as apple juice. There are 7,000-plus apple varieties to choose from in various colors, shapes, and flavor profiles. Further, apples thrive across America. Cider was one of the most popular drinks in America from colonial times to the 20th century. In 1920, the 18th Amendment went into effect, Prohibition started, and cider was cast to the margins of drinking culture until the first half of this decade. Today, the Pacific Northwest produces more cider than any other region in the country, with Washington in the top five states overall. And no state is more important to apples than Washington, which produces 10 billion to 12 billion apples annually, roughly 64-percent of the nation’s apples. The Northwest Cider Association will hold its first in-person symposium, bringing together cidermakers, growers, marketers, and executives for a two-day event of education and networking at the Greater Tacoma Convention Center March 14-15. The symposium will also feature a public tasting Monday night with advance tickets available here.

CIDER FLIGHT: Long before Washington state had legal weed, it had apples. In 2008, Craig Campbell and his wife, Sharon, began experimenting with making cider from dessert apples grown in their 400-acre Eastern Washington commercial fruit orchards. They opened Tieton Cider Works. Since then, the Pacific Northwest craft cider scene has exploded. Add to all the great Washington and Oregon cider our sparkling blue skies, stunning scenery, and plenty of places to hike, bike and otherwise work off our cider bellies, and there’s no place in the world to drink craft cider. In celebration of the Northwest Cider Association’s 2022 NW Cider Symposium at the Greater Tacoma Convention Center today and tomorrow, Peaks & Pints presents a flight of Northwest ciders — Peaks and Pints Monday Cider Flight: Washington Pioneers — to share at our craft lodge or enjoy at home. 11 a.m. to 10 p.m., Monday, March 14, Peaks & Pints, 3816 N. 26th St., Basecamp Proctor, Tacoma

FILM: Peter Dinklage stars in the new Cyrano movie — a musical adaptation of the 1897 Edmond Rostand play — which screens at The Grand Cinema. In Rostand’s verse extravaganza, Cyrano de Bergerac, the generously nosed poet warrior of the title embarks on an anguished ghostwriting project to help his fellow soldier, Christian, at the behest of Roxanne, who has fallen in love with Christian at first sight. Cyrano has loved Roxanne privately since they were childhood friends. With his own heart gently weeping, Cyrano composes love letters on behalf of Christian to Roxanne, though, of course, the ruse cannot remain a secret forever. 1:45 and 4:40 p.m., Monday and Tuesday, March 14-15, 606 S. Fawcett, Tacoma

CHOIR TOUR: Founded in 1932, Adelphian Concert Choir is one of the signature groups of the University of Puget Sound and is recognized as one of the Northwest’s most acclaimed ensembles. For more than 80 years this auditioned choir has sustained a level of choral excellence that has brought accolades from audiences in Canada, Europe, and on the West Coast. The Adelphian Concert Choir, conducted by Steven Zopfi, hits the road for their spring tour 2022, which includes a performance at Christ Episcopal Church Tuesday night. 7:30 p.m., Tuesday, March 15, Christ Episcopal Church, 310 N. K St., Tacoma, no cover