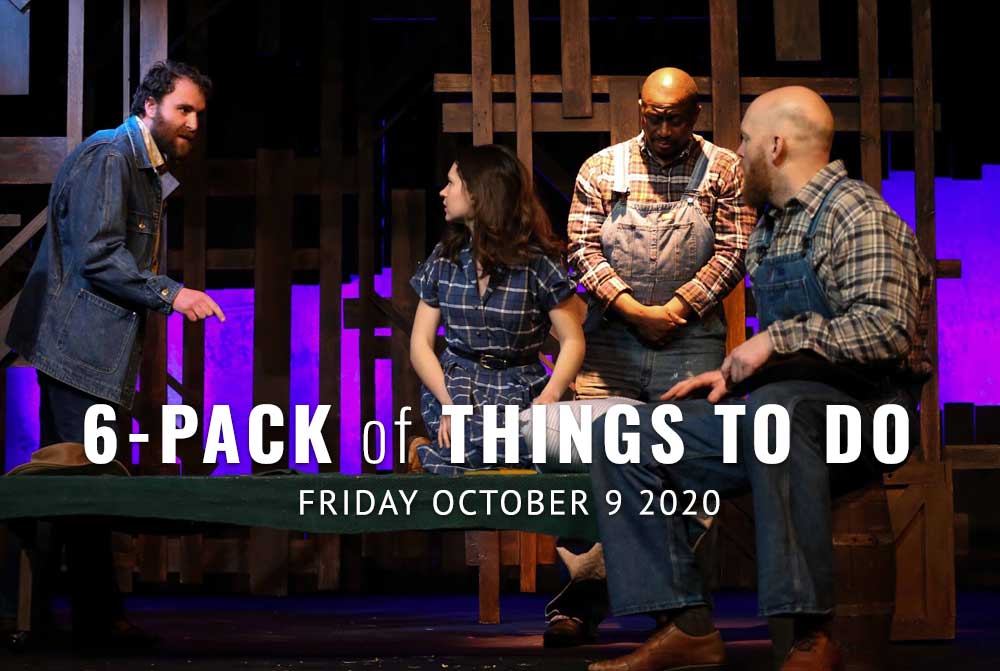 Happy Friday! 6-Pack of Things To Do: Friday October 9 2020 is arts heavy, which means it’s going to be a great day. Cheers!

THEATER CHAT: “Tacoma Little Theatre begins 2017 with John Steinbeck’s classic tale, Of Mice and Men, directed by Niclas Olson, founder and managing artistic director of New Muses Theatre Company,” writes Alec Clayton in the Weekly Volcano‘s first issue in 2017. “It’s been a pleasure working with the cast to find new layers in Steinbeck’s classic,” Olson tells Clayton in the same feature story. “What jumps out at me every time I watch it in rehearsal or read over the script (or novel) is how big all the characters dream. That resilience in the face of extreme poverty and abuse is inspiring, and a great lesson for everyone. I don’t know how Steinbeck managed to create a story that is so heartbreaking while at the same time incredibly hopeful, but it’s a joy to stage. I can’t wait to share our version with an audience.” Tonight, the Tacoma Little Theatre cast of that 2017 Of Mice and Men production reunite online to share their experiences. 7 p.m., TLT Zoom Room, free, photo by Niclas Olson

TACOMA ART MUSEUM: It’s open! Since closing March 13, the Tacoma Art Museum staff has been hard at work creating a reopening strategy to provide a safe and healthy environment for visitors and staff. David F. Setford, TAM’s executive director, served on the state-wide committee that created museum specific reopening procedure recommendations that was submitted to the Office of Governor Jay Inslee. Though TAM’s doors are open again, its role in the community as a place for lively discussions, community celebrations, and educational opportunities has shifted into digital spaces through at least the end of 2021. On TAM’s website and social media, “TAM at Home” will continue to offer free at-home art making activities, access to TAM’s permanent collection online, and other new programs. 10 a.m. to 5 p.m., Friday-Sunday, 1701 Pacific Ave., Tacoma

BEER FLIGHT: In the early ’90s, Dusty Trail converted the historic Engine House No. 9 bar into a brewpub at the corner of Sixth Avenue and Pine Street, officially becoming the first microbrewery in Tacoma. Dick Dickens grabbed the Engine House reins in 2002, bringing in head brewer Doug Tiede. Heads turned and medals were hung. In 2011, The X Group added the Engine House to their local restaurant empire, with Shane Johns and Donovan Stewart running the kettles and hanging even more medals, mostly for their sours and saisons. Last year, they separated the brewery from the restaurant and opened E9 Brewing in Tacoma’s Historic Brewery District. This year, they have cranked out an endless supply of new, delicious IPAs, five of which are in our to-go beer flight today, Peaks and Pints Pilot Program: E9 IPAs On The Fly. 11 a.m. to 10 p.m., Peaks and Pints, 3816 N. 26th St., Basecamp Proctor, Tacoma

FRIGHTHOUSE SQUARE: If it’s done nothing else of any use to anyone, at least the coronavirus has caused people to get creative. With a worldwide lack of personal protective equipment leaving even medical professionals — let alone average Joes — vulnerable to catching the virus, people have been coming up with increasingly interesting ways of keeping themselves safe — from plastic water jug helmets to inflatable animal costumes. What costume will you wear when you visit the Freighthouse Square Trick-or-Treat Retail Market? Sexy College Scandal Mom? Quarantine Couch Potato? Murder Hornet? Hand Sanitizer? That’s right, you can trick-or-treat, in costume, while exploring the historic building full of shops and a food court. But, remember, do not use a costume mask (such as for Halloween) as a substitute for a cloth mask unless it is made of two or more layers of breathable fabric that covers your mouth and nose and doesn’t leave gaps around your face. 11 a.m. to 6 p.m., Freighthouse Square, 2501 E D St, Tacoma

CLASSICAL: The pandemic has effectively canceled conventional live concerts, and with it, entire concert programs for the 2020-21 season. Tacoma’s classical music organizations have scrambled to find alternatives to their programming. The conundrum is this: Delivering quality music to audiences while also prioritizing their safety, and that of the musicians. The University of Puget Sound’s vast classic music program adjusted as far back as March. The North Tacoma institution has streamed encore presentations, as well as stage virtually concert — such as their annual Collage concert. “Collage: 10th 1Annual Faculty/Student Showcase” will join the Schneebeck Live platform, just like the other UPS classical concerts. Tonight, faculty members and students will perform together virtually in an evening of chamber music representing School of Music vocal and instrumental ensembles. 7:30-9 p.m., Schneebeck Concert Hall via Schneebeck Live

LIVE CONCERT: The Beatniks got together in 1990, before grunge hit the fashion magazine. They formed after the original drummer’s boss offered him a free practice space in exchange for a performance at his daughter’s wedding. So the drummer called a few friends, threw together a set of familiar tunes, and without even rehearsing, the Beatniks played their first show. Today, they’re Seattle’s most famous cover band (1960s-1980s), and will perform an outside concert at Zog’s on Fox Island. It’s a live stream show for the Band Together fundraiser to support local businesses. 5-8 p.m., Zog’s, 585 6th Ave., Fox Island, $20-$25