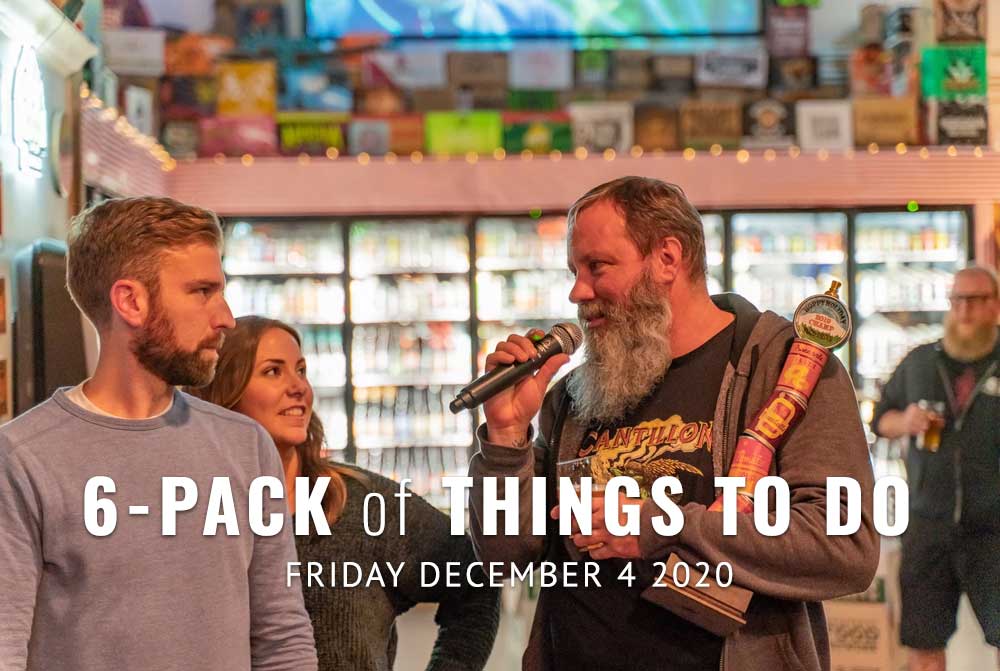 It’s beginning to look a lot like 6-Pack of Things To Do. …

BEER FLIGHT: Every December — while the bartenders close down our Proctor District craft beer bar, bottle shop and restaurant for the night — Peaks & Pints co-owner Pappi Swarner grabs three holiday beers, heads upstairs to his office, cranks his computer speaks to an 11 and watches holiday Youtube videos. Obviously, he can’t perform his holiday tradition this year … and Peaks & Pints. No, his holiday hell now takes place inside his home, much to the chagrin of his wife and daughter. In the spirit of giving, we offer you the chance to share his joy. Today, he pairs the three Christmas season beers below with three snippets of his beloved Emmet Otter’s Jug-Band Christmas, the 1977 Muppet special about destitute forest critters who assemble a bluegrass band to win Christmas cash in a talent show against the Riverbottom Gang, a motley crew of rich kids with bad attitudes who enter into the talent contest as The Nightmare. The hitch: Emmet forms a jug band with his dirt-poor buddies and he’s stuck on bass, meaning he’ll have to punch a hole in Ma’s washtub to make an instrument. This was back in the days before you could finance a washtub bass at 45 percent interest over 36 months at your neighborhood music-superstore chain. Stop by for Peaks and Pints To-Go Christmas Beer Flight: Riverbottom Gang. 11 a.m. to 8 p.m., 3816 N. 26th St., Basecamp Proctor, Tacoma

12 DAYS OF HAUL CRAWL: The Downtown Tacoma Partnership’s annual shopping event Holiday Haul Crawl is back through Dec. 12. A different promotion will post every morning on Downtown Tacoma Partnerships’ Facebook and Instagram. Participants will then have until midnight each day to take advantage of the promotion unless otherwise indicated. This year there will be giving away with more than $2,000 in gift cards to many downtown businesses.

MUSIC: Cellist Alistair MacRae is the Cordelia Wikarski-Miedel Artist in Residence at University of Puget Sound School of Music and the cellist of the Puget Sound Piano Trio. He has appeared as a soloist, chamber musician, and orchestral principal throughout North America and in Europe, Asia, South America, and the Middle East. His playing has been praised for its “rich sound and lyrical phrasing” (Palm Beach Daily News). The University of Puget Sound School of Music presents their Jacobsen Series faculty recitals featuring MacRae tonight via the Schneebeck LIVE channel. 7:30 p.m., Schneebeck LIVE, free, photo credit David Crow

FILM: Thomas Vinterberg’s latest comedy of manners, Another Round, or the more blunt Danish title of the film, Druk (Drunk), features four middle-aged teachers, the youngest celebrating his 40th birthday early on in the film, who come up with the scheme to go through life, their domestic and professional existence, with a steady blood alcohol level of 0.05%. It streams in The Grand Cinema’s Virtual Screening Room. Pair the movie with many beers or ciders from the Peaks & Pints cooler to keep your blood alcohol level at 0.05%. Cheers! $12 rental, photo credit Nordisk Films