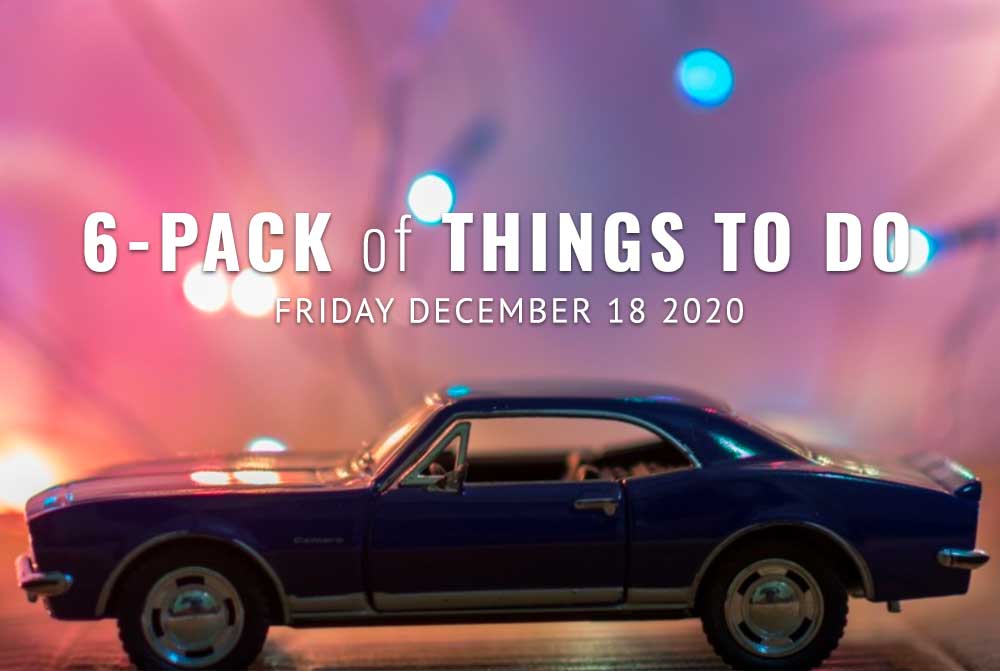 Here is today’s 6-Pack of Things To Do during the most disorienting and surreal December in your lifetime. Happy Friday!

HOLIDAY LIGHTS: Get ready to see a wonderland of holiday lights without ever having to leave the comfort of your vehicle. LeMay Collections at Marymount joins the drive-thru holiday light experiences. Get into the spirit, and never out of second gear, as you drive the pathway and enjoy the lights, history of the cars, and photo-worthy memories, thanks to the folks at DAZZLE NW. A stunning wonderland awaits as you cruise down the holiday road. 4-11 p.m., LeMay Collections at Marymount, 325 152nd St. E., Tacoma, $12-$25 here

BEER FLIGHT: Every December — while the bartenders close down our Proctor District craft beer bar, bottle shop and restaurant for the night — Peaks & Pints co-owner Pappi Swarner grabs three holiday beers, heads upstairs to his office, cranks his computer speaks to an 11 and watches holiday Youtube videos. Obviously, he can’t perform his holiday tradition this year … at Peaks & Pints. No, his holiday glee now takes place inside his home, much to the chagrin of his wife and daughter. In the spirit of giving, we offer you the chance to share his joy. Today, he pairs three seasonal beers with The Christmas Shoes, a made-for-tv movie starring the guy who used to talk really smart with the president but then ended up doing puppet theater in Reno. Yes, Rob Lowe. Stop by Peaks & Pints and grab today’s holiday to-go beer flight, put on your Christmas shows and enjoy the movie. 11 a.m. to 8 p.m., 3816 N. 26th St., Basecamp Proctor, Tacoma

MUSIC: The students of the University of Puget Sound Community Music Department perform a, well, community concert with a variety of soloists of different ages and various stages in their musical development. There will be some jazz and some classical music repertoire played on tuba, piano, violins, and more. Pair the community music concert with Single Hill Brewing‘s Local Knowledge IPA from the Peaks & Pints cooler. 7 p.m., Schneebeck Live, free

THEATER: Tonight, the cast of Tacoma Little Theatre’s 2019’s Holmes for the Holidays (or The Game’s Affot) reunites to share their experience of putting on this holiday murder comedy. “As directed by Jennifer York, Holmes for the Holidays is a breezy, endearing comedy that provides a serviceable mystery at its center; Holmes himself may have solved it all in just a few minutes, but then we’d miss out on all the madcap fun produced by this outstanding ensemble cast,” wrote Rev. Adam McKinney in the Weekly Volcano. Jump on TLT’s Facebook Live or their Zoom Holmes and ask questions or just sit back with a Baerlic Brewing All Seeing IPA from the Peaks & Pints cooler. 7 p.m., free

CLASSICAL: You can hate on the holidays all you want, but there’s no denying they bring a wealth of artful yearly traditions. That’s right, folks: it just wouldn’t be a happy holiday without some singing about God. And for that, there’s no beating Handel’s “Messiah,” a piece for choir, orchestra and soloists that has delighted audiences worldwide for more than 270 years. As 18th-century music historian Charles Burney once said, “Messiah” has fed the hungry and clothed the naked, fostered the orphan, and enriched succeeding managers of Oratories more than any single musical production in this or any other country.” We’re not totally sure what that means, but a pandemic isn’t going to stop Symphony Tacoma from performing their annual version, this time with Symphony Tacoma  soprano Holly Boaz, mezzo-soprano Soon Cho, tenor James Brown, bass Barry Johnson, and Director Geoffrey Boers. This virtual performance will utilize new pictures and video to bring a distinct “2020” vision to the text including personal and newsworthy pictures of our lives today as they reflect the texts. 7:30 p.m., Symphony Tacoma Youtube

FILM: Love Sarah, the debut feature film from director Eliza Schroeder, is a sweet little dramedy about three women who are brought together by the loss of their mother/daughter and best friend, Sarah. Together they decide to open a bakery to honor Sarah’s memory. Grab a The Bruery Bakery: Coconut Macaroons imperial pastry stout from the Peaks & Pints cooler and stream this film from The Grand Cinema’s Virtual Screening Room. $12 rental