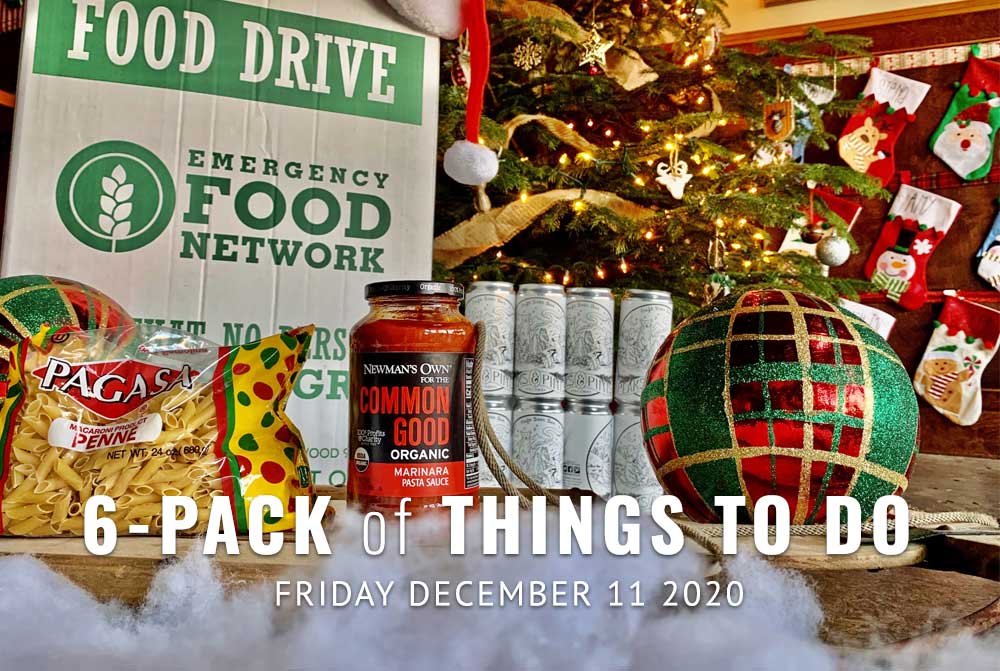 Welcome to the holiday wonderland of 2020, where Santa visits are virtual or behind a mask and interactive kids’ activities have been nixed until next year. Still, there’s a lot that’s merry and bright this year, as 6-Pack of Things To Do demonstrates. Pro Tip: Please call ahead as online events are booking fast.

HOPPY HOLIDAY FOOD DRIVE: Newman’s Own Foundation, founded by the late actor and philanthropist Paul Newman, operates CommonGood.com dedicated to sharing uplifting stories to highlight the good works of people, communities, and organizations from around the world. Newman should highlight John and Catie Douville of Douville Home Group. In addition to hooking people up with lovely homes, the Douvilles posts community events on their website, and are the team behind Hoppy Holiday Food Drive. In partnership with Peaks & Pints, the Douvilles united Pierce County breweries and cideries to support the Emergency Food Network. Through Jan. 8, 2021, seven breweries and one cidery will collect non-perishable food items and hygiene products to be distributed to thousands of Pierce County residents in need. Today’s food donation suggestion is Newman’s Own For The Common Good Organic Marinara Pasta Sauce and a bag of Pagasa penne. Drop them off at Peaks & Pints or the eight participating craft beer and cider joints. Read the full story here. Cheers!

BEER FLIGHTS: Every December — while the bartenders close down our Proctor District craft beer bar, bottle shop and restaurant for the night — Peaks & Pints co-owner Pappi Swarner grabs three holiday beers, heads upstairs to his office, cranks his computer speaks to an 11 and watches holiday Youtube videos. Obviously, he can’t perform his holiday tradition this year … at Peaks & Pints. No, his holiday happiness now takes place inside his home, much to the chagrin of his wife and daughter. In the spirit of giving, we offer you the chance to share his joy. Today, he pairs three Christmas season beers with a go-go flight of Brouwerij de Molen imperial stouts with the appropriate The Year Without a Santa Claus on ye ol’ Youtube — specifically the Snow Miser/Heat Miser song. While not Christmas or holiday beers per se, Pappi does love de Molen imperial stouts during the holidays as they pair well with his favorite stews, traditional Dutch desserts and cheeses. He also loves windmills and Menno Olivier launched de Molen 2004 at the historical windmill De Arkduif along the Oude Rijn river in the Netherlands. Bodegraven. Besides, the stouts also keep him warm as most likely he’ll be forced to carry out this ritual in his backyard. 11 a.m. to 8 p.m., 3816 N. 26th St., Basecamp Proctor, Tacoma

RESEARCH SYMPOSIUM: The University of Washington Tacoma Environmental Sciences, Biomedical Sciences, Environmental Sustainability, and Mathematics majors host the Fall Sciences and Mathematics Undergraduate Research Symposium where you can pour craft beer from the Peaks & Pints cooler into your dropped jaw. We imagine the goal of these symposiums is to set up a platform for sharing and expanding knowledge so even the unaware freshman or sophomore who is just now hearing about some of this stuff or the 30-year professional both get something out of it. What’s cool is UW-T lets us common folk into the room too. 10 a.m. to 2 p.m., UW-T Big Brain Room, register here.

POWERFUL MOMENTS: Tacoma Little Theatre presents A Minidoka Christmas, an evening of first-person stories of those who were incarcerated in internment camps during the holidays of World War II. Edited and directed by Aya Hashiguchi Clark, from interviews by Densho, Over the course of eight scenes some of the Pacific Northwest’s finest talent will bring these powerful moments to life. 7:30 P.M., TLT Youtube, free

FILM: A retired actress from the golden age of Argentine cinema shares a mansion with her husband, a screenwriter and a director. They will do anything to preserve the world they created for themselves. That’s the premise for The Weasels’ Tale, a pitch-perfect dark comedic thriller that stars a bumper crop of well-known older Argentine actors. Stream it from The Grand Cinema’s Virtual Screening Room. $11.99 rental