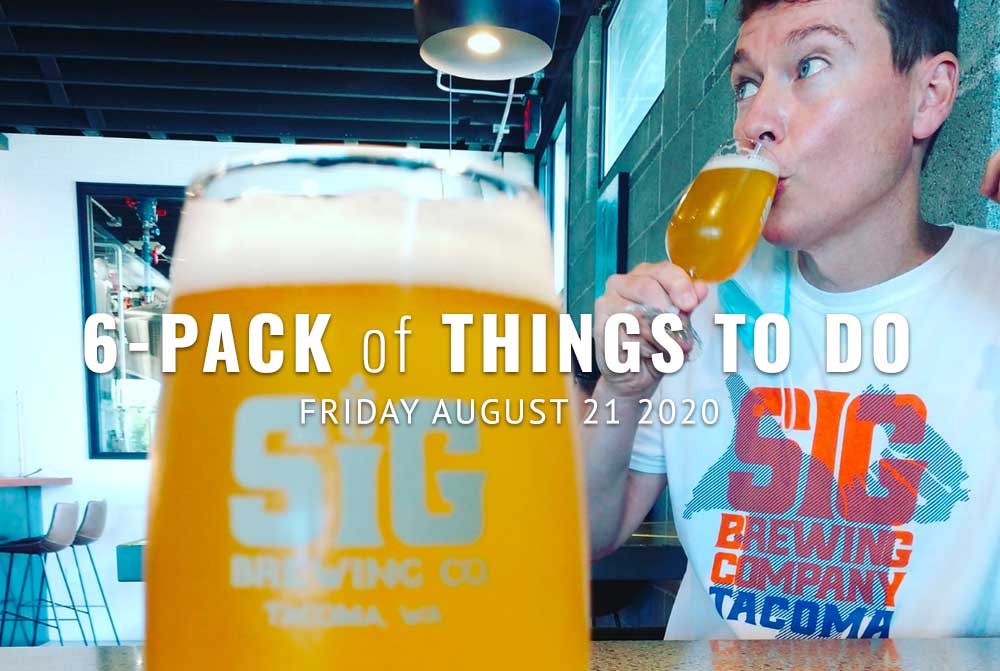 Reach further into that small collection of summer clothes: It’s officially going to rain in the South Sound. Peaks & Pints 6-Pack of Things To Do Pro Tip: Don’t freak out and look up or an acidic raindrop will send your contact lens off-kilter and make you unable to open your eye beyond a squint.

BEER RELEASE: All the leaves are green (all the leaves are green) / And the sky is grey (and the sky is grey) / They brewed a hoppy lager (they brewed a hoppy lager) / On a summer’s day (on a summer’s day) / We’d be dry and warm (We’d be dry and warm) / If we were in L.A. (if we were in L.A.) / Tacoma Dreamin’ (Tacoma Dreamin’)/ Release on such a rainy day. … That’s right; Tacoma breweries Sig Brewing and Wingman Brewers will release their hoppy lager collaboration Tacoma Dreamin’ in both of their taproom today. This light bodied and clean lager has a hop aroma and flavor from a double dose of dry hopping with Nelson Sauvin and Citra hops. So get down on your knees and pray this rain away. This lager screams for such a summer’s day. Noon to 10 p.m., Sig Brewing, 2534 Tacoma Ave. S.; noon to 7 p.m., Wingman Brewers, 509 Puyallup Ave.

BEER FLIGHT: Hop Breeding Company of Yakima, Washington released Citra in 2007. It wasn’t until Sierra Nevada Brewing Co. dry-hopped its Torpedo IPA two years later that the hop turned heads. Citra Brand HBC 394, as its officially known, is comprised of Hallertau Mittelfrüh, US Tettnang, Brewer’s Gold and East Kent Golding with a fairly high alpha acid and total oil contents, plus a low percentage of co-humulone for bittering. Bittering is cool and all, but Citra’s organoleptic profile and chemical composition lend themselves overwhelmingly to aromatic and flavor additions of citrus and tropical fruits such as grapefruit, mango, gooseberry, lychee, melon, orange rind and passionfruit. These intense citrus and tropical notes make it the perfect candidate for a single hop IPA and our to-go beer flight Peaks and Pints Pilot Program: Citra On The Fly. 11 a.m. to 8 p.m., Peaks & Pints, 3816 N. 26th St., Proctor District, Tacoma

I’M ON A BOAT: There’s an old saying that goes something like “The two happiest days in a boat owner’s life is the day they buy a boat and the day they sell it.” So, obviously renting boats is the way to go. Here in Tacoma, spending a day on a boat you don’t own is way cheaper than you think. Metro Parks has a fleet of 14-foot rental boats with 9.9 hp motors and all of the required safety gear plus a tank of gas. They even rent rod and reels, and salmon nets. Invite Andy Samberg and T-Pain — apparently they like boats. A LOT. Yay, boats! Boat and motor 1st hour $50, $25 additional hourly rate, $150 for the day (make T-Pain pay!), Point Defiance Marina, photo courtesy of Metro Parks

MARKET DAY: The Lakewood Farmers’ Market has drive-thru and walk-thru options. Cars can drive in a horseshoe slowly through the middle of the market, while pedestrians will walk around the exterior, using the sidewalk. Vendors will have both sides of their booths open, to allow customers to shop. Always ask: “When was it picked?” What time of day the farmer collects his or her harvest directly relates to the nutrient profile of the fruits and vegetables you buy. Example: Those who pick in the late afternoon ensure the most nutrient-dense (and thus tastiest) produce. Don’t always ask for discounts at end of the market day unless you want to hear, “I own a barn — I wasn’t born in one.” 3-7 p.m., Fort Steilacoom Park, 8714 87th Ave. SW, Lakewood

DANCING IN THE PARK: Peaks & Pints usually doesn’t need a reason to start dancing in the middle of a park, but Tague The World is giving us one tonight on the Dune Peninsula at Point Defiance Park. Tague says all are welcome and you can dance however you like. Come move your body and let your heart shine in all of the ways. He does have the tough task of figuring out what will get Grandma moving while keeping the young ’uns from revolting — and vice versa. 7-9 p.m., Dune Peninsula at Point Defiance Park, 5361 Yacht Club Road, Tacoma

OUTDOOR MOVIE: Whether you love or hate baseball, summer, or growing up, one thing goes without saying: The Sandlot is one of the greatest movies ever made. The coming-of-age tale about a group of young bros playing baseball, fighting dogs, and becoming super besties resonates with people of all ages, and still holds up as one of the best baseball-related movies ever made, even tonight at Fort Steilacoom Park. Lakewood Parks and Recreation hosts a drive-in movie at the park with the scrappy coming-of-age comedy, food trucks and socially distanced fun from your own vehicle. Ease the car seat back and kneel under the crushing weight of summer traditions — baseball, kissing, running from large dogs and skidding on bikes — all in the summerific suburb of Webster Groves. You’re killing us, Smalls! 8:30 p.m., Fort Steilacoom Park, 8714 87th Ave. SW, Lakewood, photo courtesy of 20th Century Studios