MITCHELL LOVETT: The turnout was high yesterday. In voting numbers for sure, and delivery sandwich pick-ups indeed, but I’m sure around burning bowls and makeshift watermelon bongs too. Welcome to day 10 of the Peaks and Pints Tournament of Beer: Northwest Lagers. Hi folks. I’m Peaks bartender Mitchell Lovett and I’m here to help you get through the fogginess and dry mouth with a recap of yesterday’s Second Round action followed by four Second Round games. If folks want to vote now, click VOTE NOW. What up, Claire?!

CLAIRE BRINICH: Yo, yo, yo, Mitchell. Claire Brinich here ready to help you chat up Washington and Oregon brewed pale and light lagers as we inch our way toward the Final Four on Friday, April 29 followed by the Championship the next day. Everyone grab a lager and let’s look at yesterday’s results. … 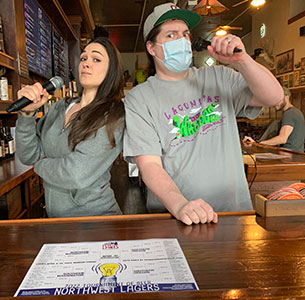 LOVETT: Those who thought Chuckanut Brewery was too busy planning their South Nut facility expansion in Burlington to get out the votes, you were wrong. Chuckanut has had progress projects in the past and still managed to make past Tournament Final Fours. Plus, their Asian lager is so delicious. Chuckanut’s Asian grabbed 56 percent of the vote and moves into the Sweet Wort Sixteen.

BRINICH: I think Wander Brewing wandered too lightly on this one. I’m sure they’re overwhelmed with their Eight Anniversary Party May 7.

LOVETT: This game was tied at 4:20 p.m. Seriously. I wasn’t stoned when I looked. Both breweries promoted the game so that’s an equal playing ground. Then, it happened. Did Silver City‘s Ziggy Zoggy Party Beer party too hard? Did Everybody’s contact the lumberjack unions? I do know Everybody’s Sales Director Pat Velten walked to the middle of the Hood River Bridge and waved a flannel flag for three hours in the early evening rain.

BRINICH: Yea, it was fun watching this game last night. At the final buzzer, Local Logger had 63 percent of the votes and a clear-cut path to the Sweet Wort Sixteen. 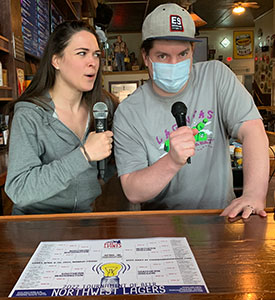 LOVETT: If you visit pFriem’s website, click on the Awards section, and scroll until your finger hurts, you’ll see why pFriem probably doesn’t care what beer style we pick for each Tournament of Beer. “It’s the Tournament of Zappa IPAs?” We got this!” they’ll no doubt respond. As you know, it’s pale and light lagers this year and the Hood River brewery is cruising right along as they do. Yesterday, they took 61 percent of the vote and are sharpening their sombreros for the Sweet Wort Sixteen.

BRINICH: I thought Level had a chance since they all wore their black belts as headbands. On the happy note — everyone walked away without broken legs.

LOVETT: It rained on Wild Ride and Santiam yesterday, so their patios weren’t a factor. Inside, the nod goes to Santiam’s English style pub and matching cuisine. But this isn’t the Tournament of Cozy Taprooms, and Wild Ride’s Cole’s Lager had a good day. The light lager went wild and grabbed 57 percent of the vote.

LOVETT: Right, as soon as he stops blabbing about the how the band Foghat is so cool.

BRINICH: It’s time for more Second Round action! Please vote for one beer per game. Please only vote once. Voting for today’s four games ends at 11:45 p.m. Please join in the singing of our national anthem. 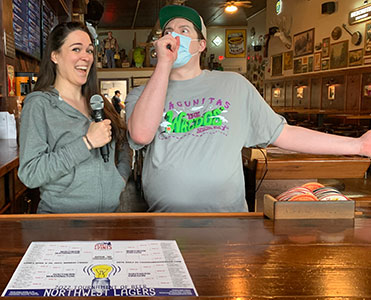 LOVETT: You can’t overlook the fact Burke-Gilman Brewing’s Vitamin R beat Aslan’s Classic Lager in the First Round — a, well, classic that Lager Officials predicted would go deep in the Tournament. You also can’t overlook Vitamin R’s name association with Rainier Beer. Peaks & Pints co-owners Robby and Justin Peterson keep checking on its status pondering if Vitamin R should somehow be in their Rainier Room at Peterson Bros. Eleven Eleven. That said, if you’re a closet Pacifico drinker, Reuben’s Brews Southsun Mexican-Style Lager is far better option. Saaz hops are the star of this delicious lager.

BRINICH: He probably can’t hear you because he’s sitting in a tin can. Grains of Wrath is probably flat our ignoring you. They have a light, crush-able American-style light lager that’s crisp, divey, and looking for its second win. 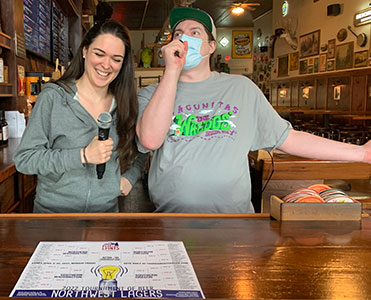 LOVETT: Hey Claire! Which bear is the most condescending? A pan-duh!

BRINICH: Let me remind you that you’re not a dad.

BRINICH: Baerlic Brewing’s Dad Beer! is brewed with flaked corn and has notes of ripe fruit, fresh spring flowers and a touch of citrus.

BRINICH: Ruse Brewing’s Shifting Dreams is a Japanese inspired rice lager that is dry, fizzy, and as pale as it gets.

LOVETT: Hey Claire! Want to know why nurses like red crayons? Sometimes they must draw blood.

LOVETT: At first glance, this game reminds me of a very short journey in Middle Earth. But then I remember that half of Middle Earth is now immune to one ring’s powers, so I don’t think a fellowship is necessary. I do remember both of these beers are worthy of being served in a beer hall.

BRINICH: I’m so glad this is the last game of the day. Yes, I agree, both beers are delicious. I can’t help but think it’s a Bend versus Eugene situation. This will be a tough decision. 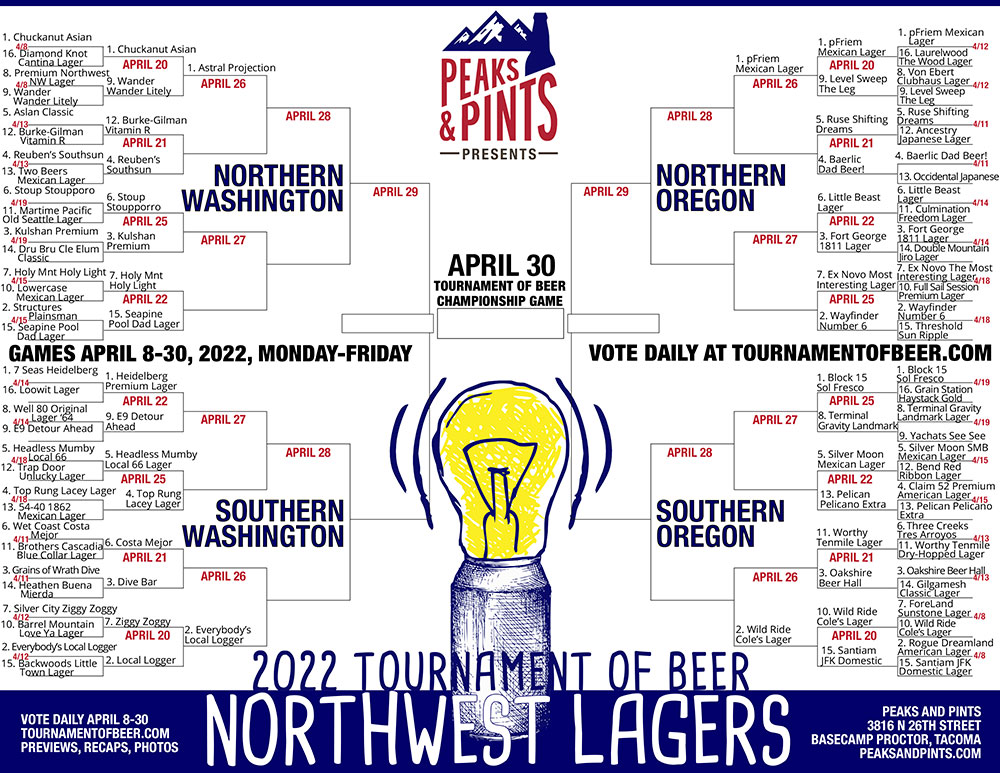