Peaks and Pints Pilot Program: Omnipollo on the Fly

Swedes Karl Grandin and Henok Fentie are fancy. Their beer is fancy, thanks to homebrewer turn mad scientist Fentie. Their label art is fancy, thanks to visual artist Grandin. They don’t brew much in Sweden, but they travel to fancy lands to brew their creative brews, many times with collaborating breweries. Since they founded Omnipollo in 2011, they keep a constantly curious, razor-sharp and fancy approach to everything they do. Today, we look at what fancy brewers can do in our to-go beer flight, Peaks and Pints Pilot Program: Omnipollo on the Fly.

Peaks and Pints Pilot Program: Omnipollo on the Fly 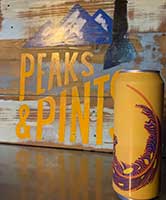 Yes, Omnipollo’s latest gose is a strange one, but it works. Brewed with blueberries, lactose sugar and maple syrup, this gose hits the nose with strong notes of cinnamon, maple and a touch of berry. The blueberries appear on the palate, with maple flavor vouching for the “pancake” title. It’s a sweet gose that could easily pass as a milkshake IPA. 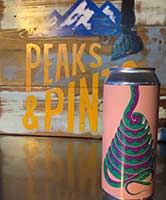 Menelik, or as it is also called, Menelik Mansplanation Stout, is a beer about listening, tuning in and being a counterweight to toxic masculinity. It has a ton of ingredients and a very difficult brew, so in a way, it is impossible to talk about without getting into some mansplaining yourself. The snake on the label is an infinite coil of talking in circles and represents the slithering nature of a dude lecturing someone without being asked. The imperial stout has notes of yellow raisin, coffee, vanilla, hazelnut, nut mix, nutmeg, and milk chocolate. 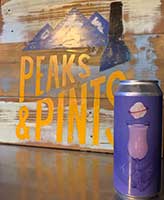 Omnipollo Ice Creamy White Chocolate Mango is a triple IPA brewed with cocoa nibs, white chocolate, mango and lactose sugar. It hits the nose with strong impressions of mango and tangerine, plus creamy milk sugar sweetness and mild notes of cocoa powder. The taste is well balanced and easy to drink with mango and orange creme flare. Middle of the palate opens up with the confectionary sweetness of cocoa and white chocolate, vanilla. 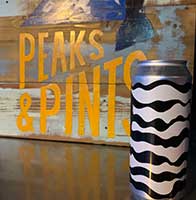 Omnipollo Nebuchadnezzar is a home brew recipe that has been scaled up with no consideration to economies of scale. The multiple award-winning hazy IPA brewed with flaked oats and wheat malt has multiple additions of Columbia, Simcoe, Centennial, plus dry hp sessions of Amarillo, Columbus, and Centennial for pineapple, passionfruit, grapefruit, and mango on the nose, with additional hints of syrupy stone fruit, pine resin, caramelized malts and a touch of booze. Grapefruit and orange lead the flavor train, with notes of passionfruit, apricot, mango, and pineapple not far behind. The back end has a fair bit of floral hops, as well as some pithy, resiny, earthy bitterness. 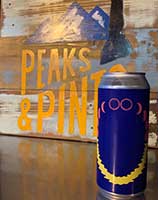 The inspiration for Omnipollo Decuple Dry Hopped Fatamorgana is Fatamorgana Double IPA, which Fentie brewed at Dugges Bryggeri with oats and wheat, and double dry hopped with Columbus, Centennial and Citra hops. (The word “fatamorgana” derives from the Italian phrase “fata morgana,” a complex form of mirage that is seen in a narrow band right above the horizon.) Quadruple Dry Hopped Fatamorgana rolled out of Great South Bay Brewery with same base recipe but with twice the dry-hopping of the double dry hopped Fatamorgana. Fenti went back to Duggess for 8-Tuple Dry Hopped Fatamorgana triple IPA — which bring us to Fancy Pants Sunday: Decuple is Fatamorgana transformed into a quadruple IPA dry hopped 10 times with Citra hops, basically turning the beer into liquid Citra and a great buzz, thanks to its 12 percent rating.  As we mentioned, Omnipollo Decuple is Citra bomb. Dip your nose in for pungent, sweet orange juice and Citra hops. The flavor follows the nose with orange, citrus and hops with a hot, long booze finish. But, and here’s the shocker — it’s smooth and fairly balance, in terms of the sweetness, hops and bitter.