There are some hobbies better kept to yourself. You know, the ones you do alone in your basement late at night. And then there are some truly cool hobbies, like model railroads. These should be celebrated and dragged out in the open for all to admire. Which is why the 25th Annual Model Train Festival, downtown Tacoma’s biggest model railroad exposition (considering, of course, the relatively small size of the subjects at hand because they are, of course, models), is being held through Jan. 2, instead of like, a half-hour. This gives you plenty of time to enjoy every floor of the Washington State History Museum filled with operating modular layouts. Museum occupancy will be limited. Purchase timed tickets in advance to guarantee a spot. Tickets will also be sold at admissions as capacity allows. Get all the details and book tickets at www.ModelTrainFestival.org. But remember to look both ways before crossing, and keep your pennies to yourself. Afterward, swing by Peaks & Pints and grab a to-go flight of holiday beer for tonight — a flight we’re calling Peaks and Pints Pilot Program: Model Train Festival On the Fly. 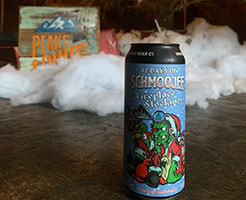 On the Fifth Day of Schmoojee Imprint Beer Company gave to you — Fireplace Stockings at Peaks & Pints. That’s right! The fifth mystery flavor is Pâtisseree Peach Banana Foster, or “Fireplace Stockings.” Here’s the deal: Peaks & Pints sold out of our Imprint Beer Company’s 12 Days of Schmoojee mystery variety packs of heavily fruited smoothie sours. But, for those who didn’t nab the mystery holiday packs, we are also stocking our cooler with a few individual Schmoojee cans from the 12 Days packs every day. As noted, Imprint’s fifth of 12 reveals is Fireplace Stockings, a creamy, sweet smoothie sour with peaches and the softest rum-soaked bananas, plus a touch of brown sugar and cinnamon. 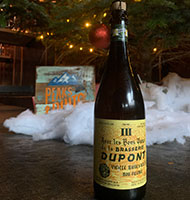 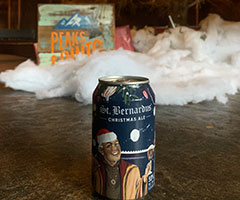 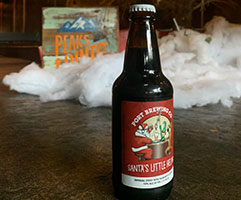 Port Brewing‘s “winter warmer” appeals to those who just want a dark, strong imperial stout with hazelnut and coffee and not “holiday spices.” This is one seriously thick, rich, naughty but nice beer with sweet hazelnut flavor.