Peaks and Pints Pilot Program: Delirium On The Fly

If you want to see pink elephants, go Belgian. Not only do pink elephants adorn the bottles and cans of Huyghe Brewery’s Delirium bottles and cans, but you’ll be seeing hypercolor pachyderms floating around your skull after a few sips. Huyghe was founded in 1906 by Leon Huyghe in city of Melle in East Flanders, not far from Ghent, the oldest, active brewery in that corner of Belgium. As with most continental breweries, Huyghe traces its original history way back, in this case to 1654 as it displays on its logo. In its modern incarnation Huyghe built its reputation on pilsner style ale, but the brewery is best known for Delirium Tremens, a highly regarded Belgian strong pale ale. They do produce a wide variety of beers ranging from said pilsner, to witbiers, fruit ales, and lagers. Today, Peaks and Pints presents a to-go flight Huyghe’s Delirium line, a flight we call Peaks and Pints Pilot Program: Delirium On The Fly. 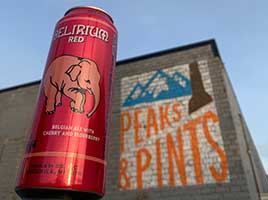 Peaks and Pints Pilot Program: Delirium On The Fly

Delirium Red is a dark and strong cherry flavored Belgian fruit beer. Based on their blonde ale this has a light pink and compact head, a soft aroma of almond, Belgian yeast, sweet fruit, and sour cherries. It tastes nothing like the aroma — there are raspberry, elderberry, apple and blackberry flavors. It’s an excellent dessert beer. 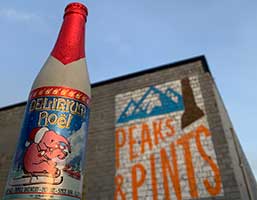 Brewed only for the Christmas and New Year, the pink elephant adorns Noël’s label: skiing, sledding, pulling Santa’s sleigh; the Pink Elephant does it all. Delirium Noel is a big, spicy beer with a lot dried fruit character and touch of alcohol to let you know that you’re drinking a beer with a double-digit ABV. Its appearance is a superb warm copper to red color, recalling Delirium’s Nocturnum except in its taste. It hides its subtlety by multiple levels of flavor and should be approached with confidence, with a tinge typical Christmas, sauced with a sweet touch, then bitterness. 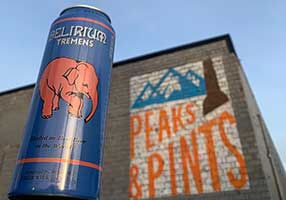 Delirium Tremens debuted Dec. 26, 1988, more than 80 years after Huyghe Brewery’s founding. Although it wasn’t Huyghe Brewery’s first beer, Delirium Tremens remains its flagship. According to legend, a tax collector felt himself gradually slipping into a state of unexpected drunkenness when he came up with the name, “Delirium.” Whether he saw pink elephants remains unknown. Delirium Tremens is one of the most popular Belgian beers, and for good reason. Its signature pink elephant logo and ceramic bottles have helped it become incredibly recognizable. The medium-bodied Belgian golden ale exhibits apple and pear aromas at the nose, and features banana, fruit, spice, and wheat flavors. 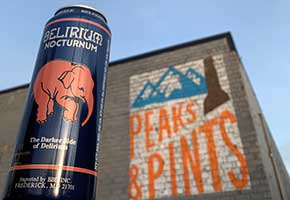 Delirium Nocturnum is essentially a darker version of its brother, more robust and tagged with the Belgian strong dark ale style. Nocturnum in particular is a fun drinker for those who want a more robust beer: it has the tart, yeasty character typical of Trappist brews but with a chocolatey, almost coffee-like flavor. You may also taste raisin and pumpkin. It’s spicy and wet on the tongue and finishes with a slick feel, which leaves you begging for another sip.