Peaks and Pints Pilot Program: Bock On The Fly

Peaks and Pints Pilot Program: Bock On The Fly

Bock beer is a strong beer style generally 6.3 percent alcohol by volume and higher. It is believed to have originated in Einbeck — a town famous for brewing in the Middle Ages. Eibeck was one of the first cities to ban the use of gruit in beer in favor of hops as a way to circumvent the Catholic Church’s high prices on gruit. The oldest written record of beer from Einbeck is from 1378 in the form of a receipt for two casks of “Einbecker” sold to the town of Celle, Germany.

Realizing that beer was a profitable export, Einbeck employed a novel quality control system. People who wanted to brew were allowed to malt their own grains and make beer in their own cellars, but not own their own brewhouse. This was owned by the city that employed professional brewmasters who would take the brew kettle to individual homes. The procedure ensured that all Einbeck beer was brewed the same and met the same quality standards. They would later certify the finished product for sale. The city branded their beer as “Ainpockisch Pier” a term that was soon shortened to “Oanpock” by Bavarian consumers and later to “a bock bier,” hence the name.

So, why the goat iconography on bock beers? Bock literally translates to ram or Billy goat in German. So it began as a visual pun (and maybe a slight poke at the Northern Germans by the Bavarians) and has now become the symbol of bock beer.

Bock is a bottom fermenting lager that generally takes extra months of lagering (cold storage) to smooth out such a strong brew. Bock beer in general is stronger than your typical lager, more of a robust malt character with a dark amber to brown hue. Spring is the season for maibock, a lighter, more refreshing bock beer style. But this season is also known for doppelbock, a style that originated as a beer to drink during lent. Bock beers can vary greatly from style to style and can go from light and refreshing to some of the strongest beers in the world with eisbocks. 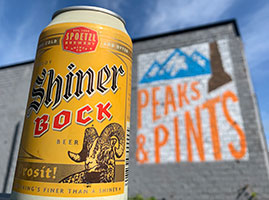 In 1915, with a co-buyer, Kosmos Spoetzl, a brewmaster trained in Germany, bought the Shiner Brewing Association and gave it his last name, but he still remained true to Shiner and kept the beers named after their precious Shiner, Texas. Spoetzl Shiner Bock is a no-frills kind of bock, but still arguably the most demonstrative of American-brewed bocks. Its very light body, and only slightly roasty notes from caramel malts, making this an easy bock to drink. 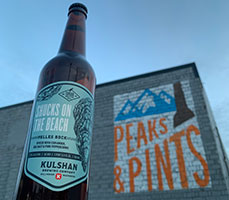 The helles bock, or Maibock, is most often a golden to clear copper-colored beer with firm malty aroma and flavor. Hops provide accent and balance, and can sometimes provide spiciness in the background. Maibock refers to the springtime serving (“Mai” is May in German) of the brew. Its other name, helles (also German), refers to the beer’s pale color. These lagers are traditionally brewed in the dead of winter and aged until spring. Kulshan Brewing and Taylor Shellfish Farms ignored the month and took a stroll on the beach and invented a helles bock with German Pilsner and Vienna malts providing a rich, bready malt profile, coriander and pink peppercorns adding subtle fruity and spicy accents, and sea salt adding just the slightest hint of refreshing salinity. 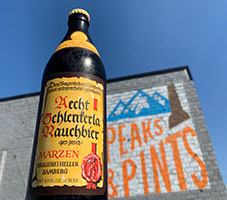 One day we hope to taste the perfect bacon beer but until then we have the hickory-charred resin-dried chocolate-smoked German-styled smoked bock beer Aecht Schlenkerla Rauchbier – Urbock, in which its barley malts are smoked over beech wood logs. Its higher smoke malt concentration and longer maturation in the 700 year old cellars underneath Bramburg create a flavor profile of most intense smokiness beautifully balanced with deep malt sweetness. It tastes somewhat sweet dark malt with dark bread and a little treacle tone, dry toasty roast, moderately smoky notes of campfire and subtle smoked ham, oak, pretty dry on the back end where the smoky, ashy notes overpower the malt. It has a fairly light body with extremely low carbonation. It’s a solid smoke beer. 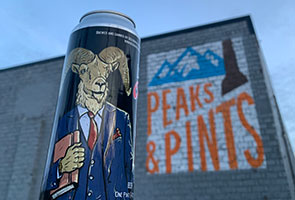 Occidental Brewing’s award-winning doppelbock is a dark and rich malty lager with a perfect balance of caramel, melanoidin, and a touch of roast malt. Its initial, subtle sweetness mellows nicely with subsequent sips, and a pleasant alcohol finish makes for a nice winter warmer.