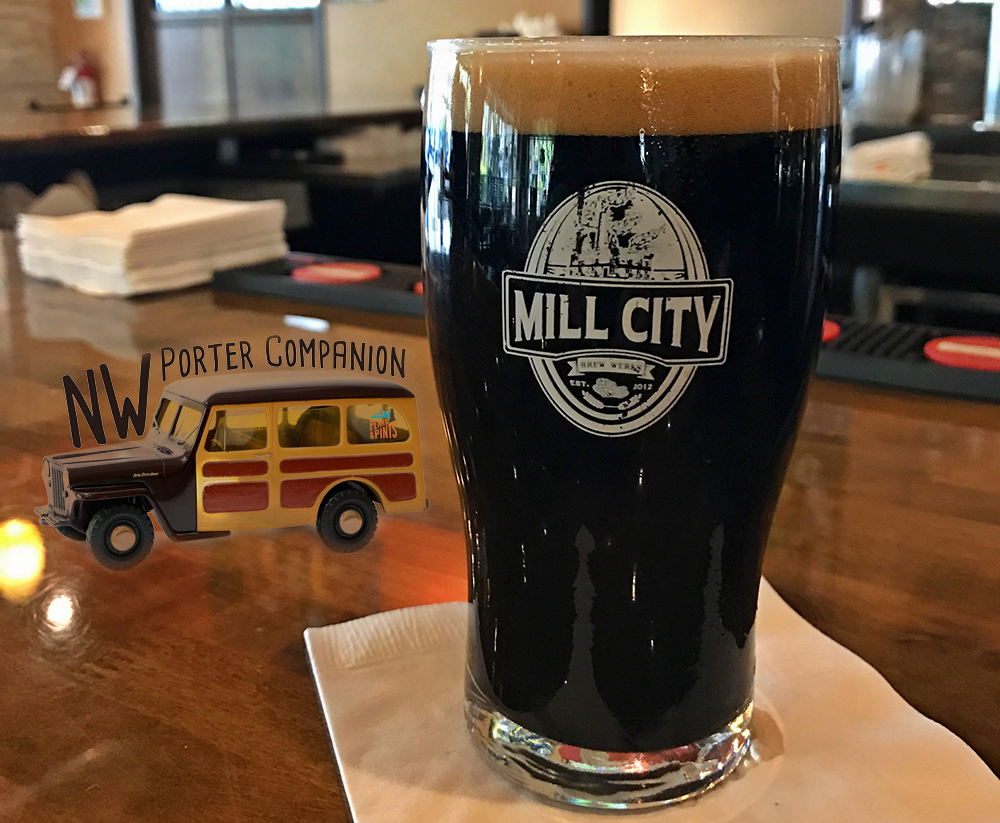 Northwest Porter Companion: Mill City Brew Werks Chocolate Porter — Sometimes you just have to let the possibility breathe. Sometimes you just have to allow that something grand and good might exist after miles of concrete and wire fences and town-destroying and junk-purveying soul-numbing strip malls. Northwest Dallas Street opened up possibilities. Trees, bustling cafes, bouncing shoppers, brick, cuteness. Turn on Northeast Fourth Street for boutiques and Miss Nola’s Cafe and galleries and gladness. A left onto Northeast Cedar Street and the parking slot right in front of Mill City Brew Werks, the restaurant, pub and brewery Mark Zech and Walt LeDoux built in 2013.

I knew a porter was part of the Werks. Zech told me as we sipped his mind-blowing Raspberry Trip Wire Stout 15 minutes after Fort George Brewery’s Festival of the Dark Arts gates opened back in February. His stout was among many dark arts pouring at the prestigious craft beer festival in Astoria, Oregon. We parted, promising to meet again under an equally enjoyable occasion.

My surprise Mill City visit yesterday didn’t yield a Zech, but it did produce a most enjoyable Chocolate Porter on nitro.

Poured properly, my bubble show was bounced by barstool #5.

“An easy-drinking, delicious Chocolate Porter on nitro,” I replied.

His tale of pending Portland breweries touring poured as I sipped. One eye fixated on his lips and the other Marty Feldmaned on the one-room Mill. The pub is arranged in a multipurpose fashion that provides a bar, a living room-style lounge area, and table and counter dining. With the focus on the brew and the inclusion of big screen TVs for entertainment, the vibe could have easily turned out to be that of a sports bar, but it’s not.

“I think I’ll hit Breakside, Ex Novo. …” his words flowed as I gazed out the large windows that wrap around the street sides of the space, allowing in lot of natural light.

“The chocolate is subtle!” I think I screamed. This porter has a nice roast. It’s silky velvet on the tongue. I could easily drink three of these while watching the baseball game.”

“Back in the day, there were no chat rooms for us to go to, we just sat around and talked to people we knew,” he replied, matching me in age.

Seeing an opening, “I stood on the front seat, next to my dad, as he drove along, drinking his beer. There were no play dates; we just ran wild. We played in the streets. We played in the old Western State Hospital. Half the time our parents had no idea what we were doing. We ran like coyotes in big herds and learned to say bad words, and climbed the giant sawdust piles at the Steilacoom mill.”