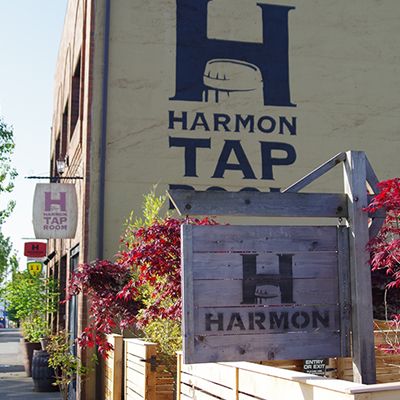 Pat Nagle and Fred Roberson opened Tacoma’s first craft microbreweries in 1997 in The Harmon Manufacturing Building, which was built in 1908 and became the largest furniture manufacturer in the West. Taking the building’s name, Harmon Brewing Company set up shop in Tacoma’s historic warehouse district. After a reorganization, Nagle and new partner, Carole Holder (now Carole Ford), subsequently opened sister restaurants The Hub, Harmon Tap Room and The Hub Gig Harbor, showing hometown pride with clever moniker beers such as Puget Sound Porter, Point Defiance IPA and Mount Takhoma Blonde. The brewing system has since moved to the Harmon Tap Room; an event room now sits where fermenters use to stand. Harmon Brewing brews all its beers, and ages many in barrels and a foeder, at the Harmon Tap Room.

In July 2014, the Harmon brewing Co. merged the Harmon Tap Room and The Hub Tacoma into one giant beer complex. “We have two restaurants and the huge all-ages outdoor Harmon Garden, a private events space, the brewery behind glass — it’s more of a destination,” says Nagle, nibbling on a Tap Room street taco, while pointing to each subject’s location — including The Hub straight above. The Tap Room turned family-friendly this year, but the outdoor beer garden was a 21 and older hangout.

Five Harmon Brewing Co. Beers You Should Check Out

Pt. Defiance IPA
Originally brewed in 1997 to commemorate the opening of the Harmon Brewery, the Point Defiance IPA was crafted to encompass what Tacoma stood for, a no fuss, palate quenching brew. The improved version uses five different malted barleys to accommodate the boatload of Pacific Northwest hops. “The combination creates the classic West Coast hop aroma and flavor that we all crave, while maintaining drinkability,” says Harmon head brewer Jeff Carlson. “In keeping with tradition we left the hoppy backbone unchanged, but added some Citra to give it that edge. Hop in your Kayak, pour yourself a glass and enjoy.” 6.1% ABV, 70 IBU

Steep and Deep Winter Ale
A seasonal available November through January, the popular Steep and Deep goes big with notes of burnt chocolate, toffee and a hoppy bite. Heavy coffee nose, with a strong alcohol front. However balances out once it warms up. 5.8% ABV

Stryker Stout
The award-winning Stryker Stout’s components are a combination of six different malted barleys including a special cherry smoked variety plus some chocolate wheat and rolled flaked oats for a smooth sipper with hints of cherry and a little smoke in the aroma and finish. The taste follows the aroma closely with roasted coffee and chocolate notes and a bit of malty sweetness. The middle boasts bitterness, with more roasted barley. It finishes with the hops, still subtle and citrusy. 7.3% ABV, 46 IBU

Disgruntled Farmhand Sour Saison
Harmon aged their Mt. Takhoma Blonde in red wine barrels with two different strains of saison yeast. While fermenting in the barrel, head brewer Jeff Carlson also added some candied ginger and three different tea blends from Ubi’s tea, herb and spice shop on Sixth Avenue and the Farmhand Sour Saison was born. A Harmon brewer accidently knocked out the bung on a year-old barreled sour saison. After a weekend open-air yeast party, the sour saison was ultra sour. Harmon brewers dialed it back a bit by blending it with their traditional saison for an impressive Disgruntled Farmhand Sour Saison. 6% ABV

Harmon Brewing Company adds a foeder to their fermentation program