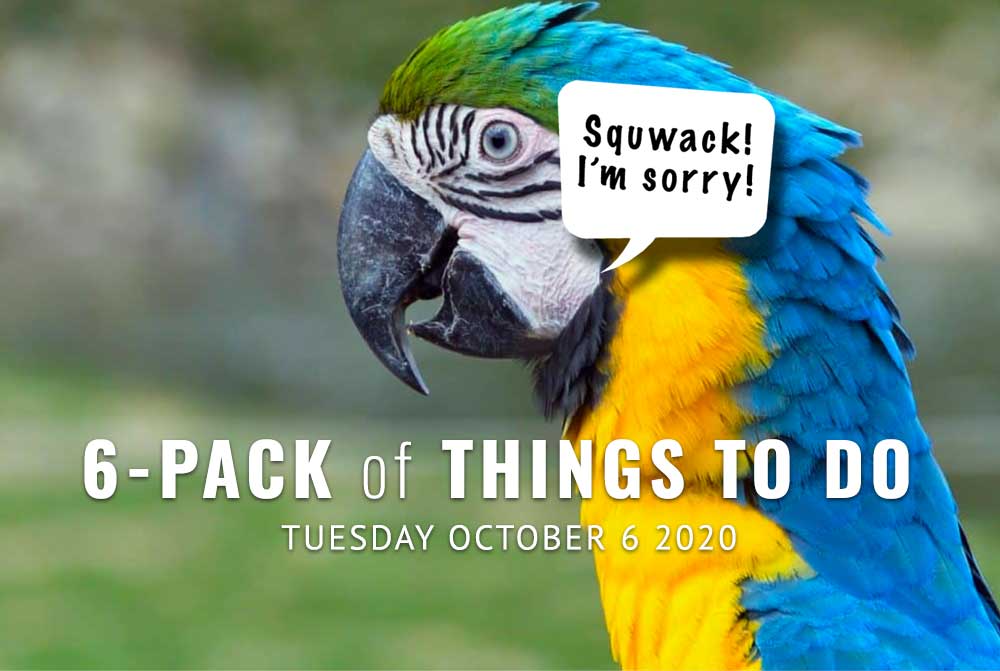 Did you hear? It’s Tacoma Arts Month. Every year, since forever, Tacoma Arts Month has showcased the very best about our community. October is brimming with hundreds of arts and culture events, exhibits, and workshops for all ages. The Peaks & Pints 6-Pack of Things To Do will relay the events, such as the Salishan National Night Out-Of-The-Box event tonight. Cheers!

ANIMAL SHOUT-OUTS: Remember when you called out your colleague for eating cake during your company’s Zoom lunch meeting? Point Defiance Park & Aquarium has a way to smooth over that relationship. Green-Winged Macaw brothers Quito and Caper will record an “I’m Sorry” video for you can send to the cake-eating guy in accounting. The Zoo’s Animal Shoutouts are a fantastic way of sending a customized video message to a friend or loved one — complete with their favorite animal. Hear one of the zookeepers speak your message alongside a walrus, sloth, seal or those kooky Quito and Caper. Details here. Photo by Christels

SALMON HOMECOMING: The public is invited to join the Puyallup Watershed Salmon Homecoming Celebration, a month long salute of the return of salmon to spawn in the Puyallup watershed, a migration that has been taking place for millennia. They will have a virtual event with both online learning activities like recorded and live videos, curricula, and interactive story maps. Keep an eye on their Facebook page for events.

NATIONAL NIGHT OUT: Over the years, a trend in South Sound neighborhoods has shifted residents’ attention from the front porch to the decks, patios and porches in back of the house — and away from what’s going on in their own neighborhood. That might not seem so important, but Safe Streets says regularly retreating to the sanctuary of a backyard can hurt neighborhood awareness and organization. Therefore, when you celebrate National Night Out tonight, step off your front porch and into the streets, in front of businesses and into parks to bond with your neighbors — wearing a mask, of course. The Salishan neighborhood is hosting National Night Out-Of-The-Box with DJ Wojack spinning, local performances, raffles and speeches from community leaders from 6-8 p.m. You neighborhood needs to step it up!

MOVIE: A Greek tragedy set in contemporary Israel, God of the Piano is the story of a concert pianist from a respected musical family who has never been able to live up to her father’s stratospheric expectations. When she becomes pregnant, she transfers her hope of being a musical prodigy onto her child. She is devastated when her son is born deaf, but she doubles down on her dream, obsessively grooming him for stardom. This beautifully composed film has the pacing of a thriller, and you may stream it in The Grand Cinema’s Virtual Screening Room. $12 movie