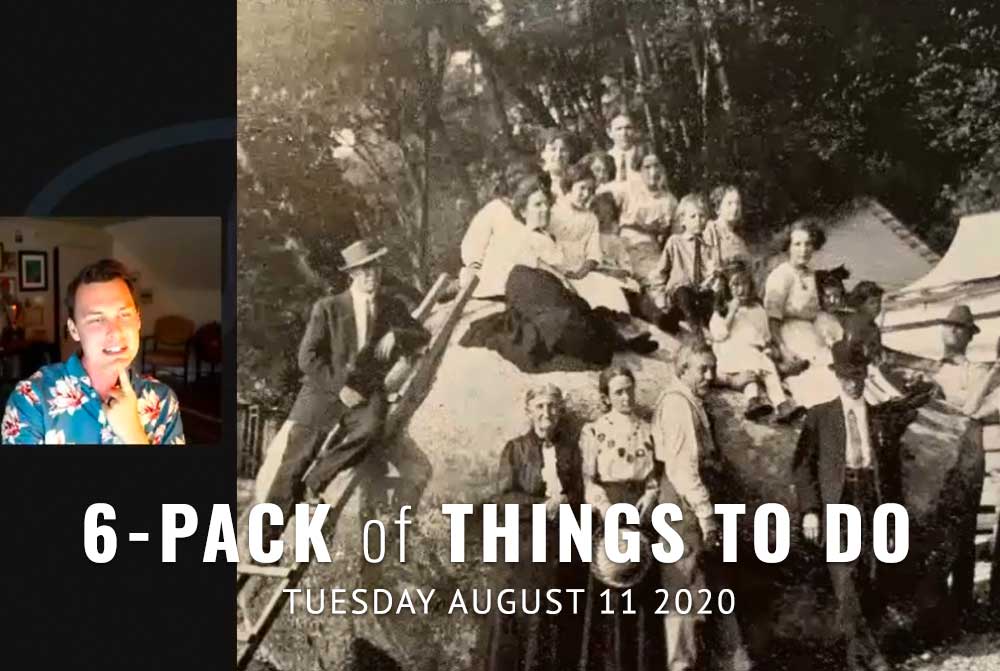 SALMON BEACH TOUR: An elaborate gate marks the entrance to an overly long driveway. Then it’s a choice between one of two parking lots, where you abandon your vehicle and traverse a super-steep hillside. Eighty-two houses, all built on stilts, line the water’s edge at Salmon Beach from just downhill from Ft. Nisqually to the southern entrance of the Nelson Bennett train tunnel. The homeowners are cool; the views are majestic; and they have their own art installations. It is a living northwest version of a Jimmy Buffet song. Salmon Beach is a working exercise in marine utopia. And you can tour it online. The City of Tacoma’s Historic Preservation Office, with Pretty Gritty Tours, is offering a free virtual tour of Salmon Beach. One of the most mysterious, nautical, and frankly steep neighborhoods in Tacoma. Pretty Gritty Tours Facebook Video

TREE-DIMENSIONAL TACOMA: The Southern magnolia just down the street from St. Luke’s Memorial Episcopal at North 37th and North Gove is this week’s Tree-dimensional Tacoma tree. Peaks & Pints’ weekly Tacoma tree column. Inspired by our house beer, Kulshan Brewing Tree-dimensional IPA, Peaks & Pints branches out for a weekly look at terrific trees of Tacoma, in conjunction with our friends at Tacoma Tree Foundation. ““The scientific name for Southern magnolia is Magnolia grandiflora, or big flower,” explains Sarah Low, executive director of Tacoma Tree Foundation. “The large, shiny leaves are evergreen so it’s one of the few broad leaf plants that has leaves even in the middle of winter. It’s a very adaptable plant and I happen to love it.” Read more about this tree and the more than 30 other Tacoma trees Low has featured on the Peaks & Pints website. Tuesday is a good day to tour all TFF’s recommended Tacoma trees, then head to Peaks & Pints for a Campfire Crowler full of the beer that inspired the tree series, Kulshan Brewing’s Tree-dimensional IPA.

MARKET DAY: Pierce County is home to nearly 1,500 farms. From seafood to rhubarb, wine to eggs and pumpkins to daffodils, the variety of products that come from the region contributes greatly to the local economy. Pierce County leads the United States in rhubarb production, raising about 50 percent of the nation’s supply. The Eastside Farmers Market runs this afternoon with a wide array of locally sourced fruits and vegetables, honey, flowers, baked goods, and … wait for it … rhubarb.  3-7 p.m., 3500 McKinley Ave. E., Tacoma

BRIDGE STROLL: The Three Bridges District is aptly named thanks to several small bridges that link North Tacoma streets over the Buckley Gulch surrounding North 21st and Oakes streets — Buckley Creek use to flow through it. It ends at Old Town. This quaint district could almost be considered an expansion of the Proctor District due to its close proximity, but it maintains a character all its own with a unique collection of establishments from eats and drinks to a plethora of services and retail provided. The best of three bridges is at North Yakima Avenue between North Anderson Street and North Fife Street. It’s similar to the other numerous bridges that span the North End ravines; but unlike the others, this one is blocked off to car traffic. The location is quiet, scenic and perfect walking distance from the main thoroughfare, which makes it feel like such a good detour. Highly recommended for romantic summer night strolls. North Yakima Avenue between North Anderson Street and North Fife Street

MARINERS: Last night, the Seattle Mariners beat the Texas Rangers 10-2 in their first game at the new Texas ballpark, snapping the Rangers’ three-game winning streak. Kyle Seager rocked Texas with a grand slam, while Dylan Moore and Kyle Lewis added homers. Tonight, the two clubs face off again in Texas with a matchup of left-handers, Seattle’s Marco Gonzalez (2-1, 3.06 ERA) goes for his third victory in a row. Mike Minor (0-3, 6.89), a first-time All-Star for Texas last season, has the most losses in the AL. Fill a Peaks & Pints Campfire Crowler with Double Mountain Brewery’s Cluster F#*k Hazy IPa and enjoy the game. 6:05 p.m., Root Sports Northwest