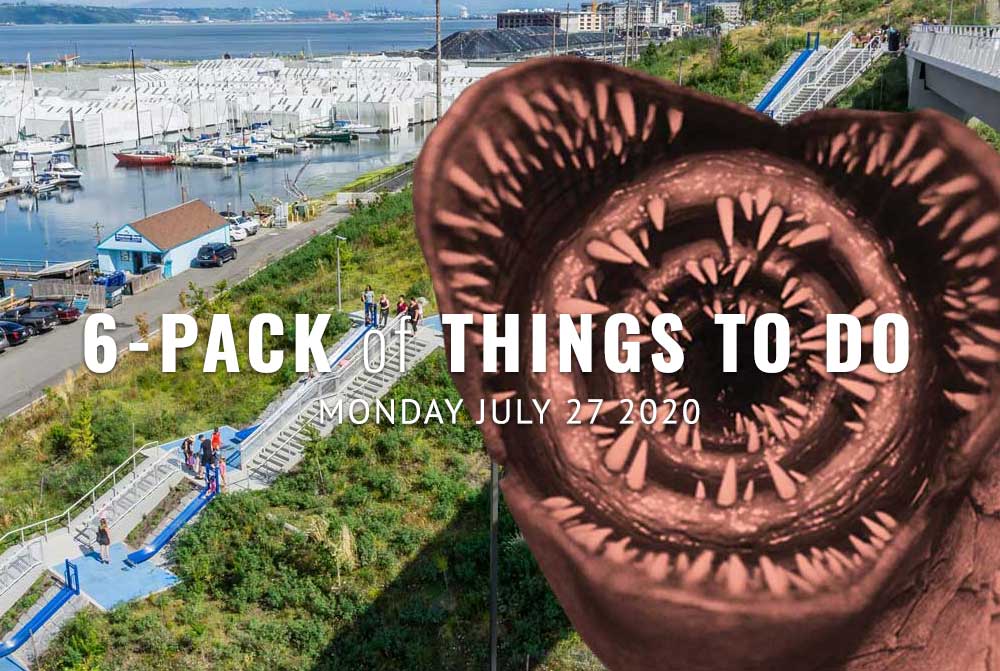 Ignoring the construction-related traffic snarls, mosquitoes, and constant reminders a pandemic is messing with our good life: Summer in the South Sound is objectively the greatest. And your pals at Peaks & Pints are here to help maximize it!

CHUTES AND LADDERS: It has sold millions of copies, is perhaps the greatest novel in the science-fiction canon, and Star Wars wouldn’t have existed without it. Tacoma-born Frank Herbert’s politically relevant fantasy novel Dune is the inspiration behind Metro Parks’ Dune Peninsula — an 11-acre park between Ruston way and Point Defiance named for the famous novel by science fiction writer Herbert, who was raised in the shadow of the former Asarco Smelter. At the east end of the park’s Wilson Way Bridge is a life-size “Chutes and Ladders” staircase and slides linking Point Defiance Park with a waterfront marina. Peaks & Pints suggest you stream Canadian rock band Rush’s 18th studio album Snakes & Arrows through headphones while sliding and climbing the park’s chutes and ladders. Snakes and Arrows, a game invented by Buddhist sages over 2,000 years ago as a game of karma, inspired the album. 5361 Yacht Club Road, Road, Tacoma

CIDER FLIGHT: In addition to growing a certified-organic heirloom-variety orchard on their historic 50-acre farm, Finnriver Farm & Cidery co-owners Keith and Crystie Kisler, co-owner Eric Jorgensen, head cidermaker Andrew Byers and crew operate a certified B corporation, meaning that a positive impact on society, workers, the community and the environment are no less important goals than generation of profit. Stop by Peaks & Pints for to-go flight of Finnriver cider that we call Peak and Pints Pilot Program: Finnriver Cider On The Fly. 11 a.m. to 8 p.m., Peaks & Pints, 3816 N. 26th St., Proctor District, Tacoma

CITY HIKE: You’ll perhaps have your best day at Chambers Bay on this glorious Monday afternoon, and you won’t even have your golf clubs. The public-use paved trails that go around and through Chambers Bay golf course are something else that makes the site of the 2015 U.S. Open unique. Begin your walk on the Grandview Trail above the course for a sweeping, panoramic view of the golf course and Puget Sound beyond. This area in the recent past was a 650-acre commercial gravel pit. Park designers kept parts of the old cement plant; they are reminiscent of Greek columns. Another park feature is a short side trip on a pedestrian bridge over the railroad tracks to the beach where additional roaming can be found. The loop trip is officially two trails: The Grandview Trail is the flat 1.25-mile trail along the rim, while the Soundview Trail connects both ends of the Grandview Trail forming the loop. Chamber Bay Loop, 3.25 miles round-trip

CHOIR: Most likely the University of Puget Sound Adelphian Concert Choir isn’t inside Schneebeck Concert Hall practicing this summer but rather jumping off Old Town Dock belting out Rachmaninoff Vespers before hitting the water. If you aren’t able to guess when their jump concerts happen, you might consider tuning into the UPS’ Loggers Perform Summer Series tonight for the Choir’s virtual “Home Concert” from March 25, 2017. Watch Conductor Steven Zopfi and the Choir while drinking an Offshoot Brewing Unwind pilsner from the Peaks & Pints cooler. 7:30-8:30 p.m., pugetsound.edu/schneebecklive

SPORTS: The Seattle Sounders take on Western Conference foe LAFC in the Round of 16 at the MLS is Back Tournament at the Walt Disney Wide World of Sports Complex in Orlando, Florida. This will be a heavyweight contest between two teams that know all about contending for trophies. Last year, after the most successful regular season in MLS history, LAFC’s run toward a title ended in a 3-1 loss to the Seattle Sounders in a Western Conference final played before an unhappy crowd of 22,099 at Banc of California Stadium. The Sounders are 1-3-1 all-time against LAFC. Pair the match with a StormBreaker Brewing Screen Breaker IPA from the Peaks and Pints cooler. 8 p.m., televised on FS1 and TUDN

MOVIE: Flannery O’Connor crossbred humor, horror and piety; her output had such hybrid vigor that she virtually established the genre of the Southern grotesque. Her first novel, Wise Blood, critiques Southern religion by way of homicide, self-mutilation, mummies and gorilla suits. Her famous, oft-anthologized short story A Good Man Is Hard to Find begins with a mundane family road trip and ends with a psycho killer, as if The Trip to Bountiful received a surprise visit from No Country for Old Men‘s Anton Chigurh. The Grand Cinema has loaded the Flannery documentary in their Virtual Screening Room. Get to know her while drinking a Standard Brewing War Pig milk stout from the Peaks & Pints cooler. $12 movie

Dune sandworm courtesy of Universal Pictures — own it on Blu-ray, DVD & Digital