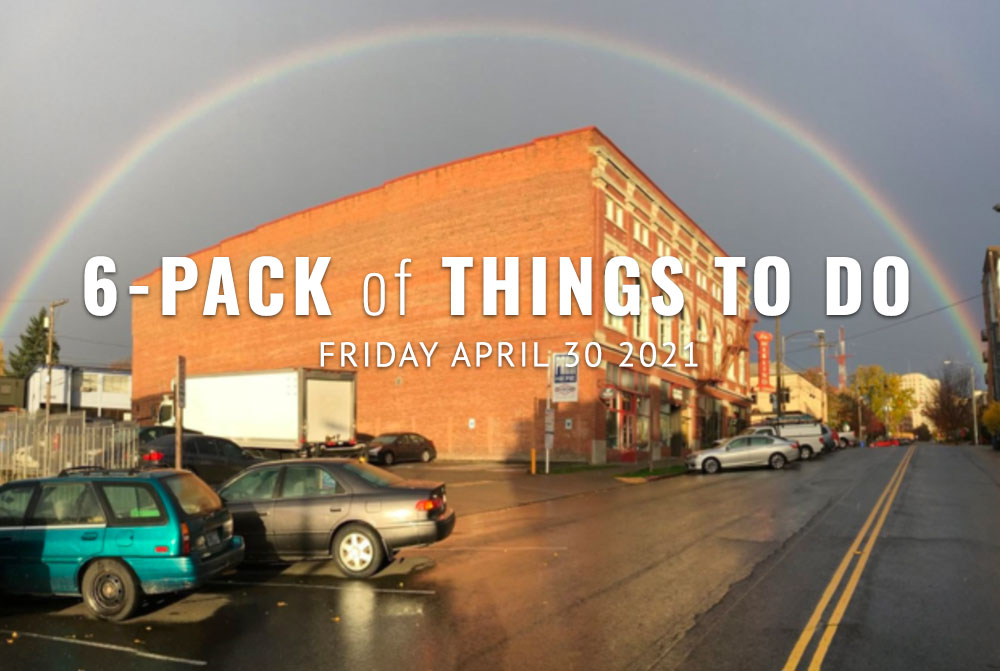 April’s showers are moving into May flowers, and while many worthy activities remain online, the calendar is starting to bloom with in-person events, albeit events with specific safety guidelines. Welcome to 6-Pack of Things To Do: Friday, April 30 2021!

FILM: The Grand Cinema re-opens for in-house viewing today. In accordance with Phase 2 mandates, the independent movie house will operate at 25 percent seating capacity and other requirements. The Grand reopens with several recent Oscar nominees. Anthony Hopkins landed Best Actor for his performance in The Father (which also took home Best Adapted Screenplay), Youn Yuh-jung made history as the first Korean to win an Academy Award by winning Best Supporting Actress for her performance in Minari; NOMADLAND won thrice: Frances McDormand with her Best Actress nod, Chloé Zhao took home Best Director, making her the first woman of color to win the award, and Best Picture — the highest accolade of them all.⁠⁠

BEER FLIGHT: In 2013, co-founders Bill Arnott and Alex Brenner began brewing English style beers in a building that was once home to Seattle Brewing and Malting, which went on to become better known as the brewer of Rainier Beer. The duo bought Two Beers Brewing’s 7bbl system and opened Machine House Brewery in Rainier Beer’s “Malt House” in Georgetown. Before moving to Seattle, Arnott was head brewer at Tipple’s Brewery in Norwich, England, which explains why Machine House focuses on true British “real ale” and cask ales hand-pumped into the pint glass, with only its naturally occurring carbonation, and at cellar temperature, rather than refrigerated. Stop by Peaks & Pints and grab a to-go flight of Machine House beers. 11 a.m. to 11 p.m., 3816 N. 26th St., Basecamp Proctor, Tacoma

CITY NATURE CHALLENGE: Started in 2016 as a competition between San Francisco and Los Angeles, the City Nature Challenge (CNC) has grown into an international event, motivating people around the world to find and document wildlife in their cities. The 2021 CNC will not be focused on competition; instead they want to embrace the healing power of nature and celebrate tens of thousands of people all around the world, searching for and documenting their local biodiversity, together in this event. Point Defiance Zoo & Aquarium, Northwest Trek, and Woodland Park Zoo have joined the CNC. Report your findings on the iNaturalist app from through May 3.

OPERA: Opera has a bad reputation of being so exorbitantly epic that it’s hard for all but the wealthiest to access. Puget Sound Opera Theater, the scrappy University of Puget Sound program with first-rate student singers and innovative programming, has been challenging that notion and trying to make inroads with kids and others who might not be able to afford Tacoma Opera seats. Tonight, the Opera Theater presents, through the magic of film production, a wide array of scenes from operas and musicals exploring distance, loss, and resolution with featured performers: Sydney Byte ’21, soprano; Will Cooper ’22, baritone; Sam Crosby-Schmidt ’22, tenor; Raine Filbert ’23, mezzo-soprano; Larissa Gaulke ’24, soprano; Emma Georgiou ’21, mezzo-soprano; Riley Granger ’21, soprano; Liana Greger ’24, soprano; Eli Kitchens ’22, tenor; Alexander Rogers ’23, tenor; and Jillian Shelver ’22, soprano. 7:30-8:30 p.m., Schneebeck Live Zoom, free

COMEDY: Comedian Mark Normand’s career seems to be on the verge of breaking out. The New Orleans native cohosts the popular weekly “Tuesdays With Stories” podcast with fellow comedian Joe List, and has performed on pretty much every late-night talk show. He’s received accolades from fellow comedians like Jerry Seinfeld, who referred to Normand as “the best young up-and-coming comic” two years ago. Catch Normand tonight at the Tacoma Comedy Club. 7 and 9:30 p.m., 933 Market St., Tacoma, $16-$30